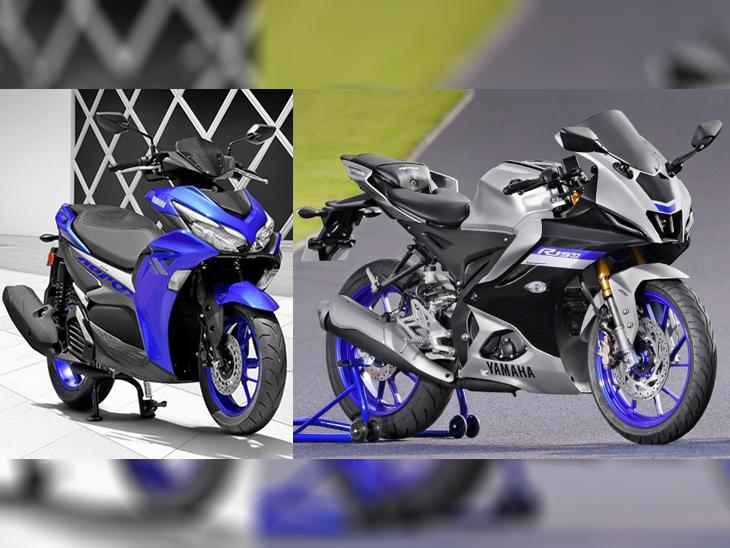 Yamaha has launched its bikes and scooters in India today. The R15 bike is the 4th generation model of the entry-level sports bike that is available in two variants, the standard and the high-spec M. Along with the new R15, the Aerox scooter has also been introduced in India, which is based on the R15. This is a maxi scooter. While the scooter is getting an automatic start and stop system to save fuel, the traction control on the R15 bike will prevent the bike from slipping.

Yamaha Aerox 155 Scooter
The engine capacity of the new Aerox 155 is 155cc. It will get a single-cylinder engine which is based on the R15 engine. Its weight is 122kg.

Features of Yamaha Aerox 155
The Aerox 155 gets an underbone design that comes with a spine section. Talking about the features, it has a huge underseat storage space of 25-litres. Digital instrumentation, start-stop technology, LED lighting, charging socket and Bluetooth connectivity are included. It gets bigger 14-inch wheels at both ends and 140-section wide rear tyres.

Engine of 2021 R15, R15M
For the first time, the India-spec R15 is equipped with a USD fork. While it has been at the international level, it has finally made its way here on the new-gen model. The R15 is powered by the same 155cc, 4-valve, single-cylinder and liquid-cooled engine.

Yamaha 2021 R15, R15M Features
The new R15 has been given a much updated design. The bike gets a new fairing and windscreen with LED headlight. A set of daytime running lamps flank the headlight unit on either side. Whereas the front end is given like the new YZF-R7. The stay for the exhaust muffler and pillar foot pegs also looks different this time.

The M variant gets a shiny silver paint scheme with blue colored wheels with a different seat cover and golden colored brakes. Apart from the redesign, the next-gen R15 also gets a revised instrument cluster with Bluetooth connectivity.

These bikes will be equipped with dual channel ABS
To improve the controlling, the R15M bikes get 282mm front and 220mm rear disc brake with ABS system.

In view of this, today we are telling about the anti braking system, how it works and how many components are there in it.

The full form of ABS is Anti Braking System, which prevents the vehicle from skidding. The ABS brake system feature does not allow the wheels to lock when braking suddenly. Because of this, the rider’s control remains in the vehicle. The bike stops without slipping.

How does the ABS system work
The sensor in the ABS continuously monitors the wheels of your vehicle and sends the data received from it to the control unit. ABS consists of four components
In which….

1.Speed ​​Sensor
This sensor continuously monitors the speed of each wheel. It consists of an exciter ring with V-shaped teeth and a coil/magnet assembly, which generates an electric pulse.

2.Valve
These components are used to control or reduce brake pressure. The valve controls the air pressure of the brakes during the ABS process. All brakes have a valve in their brake line which is controlled by ABS.

3. Electronic Control Unit
It works after the driver presses the brakes, so as to minimize slippage in slippery places. It takes signals from the sensors in the ECU circuit and controls the brake pressure, as per the information provided from the unit.

4.Hydraulic Control Unit
This is used to make the pump pressurize the hydraulic brakes. The air brake system monitors the speed of all the wheels to detect locking and as soon as the ABS system detects sudden braking, it exerts pressure on the hydraulic system of the vehicle and the brake pads press against the disc. Due to which your bike slows down.

Now know about the types of ABS