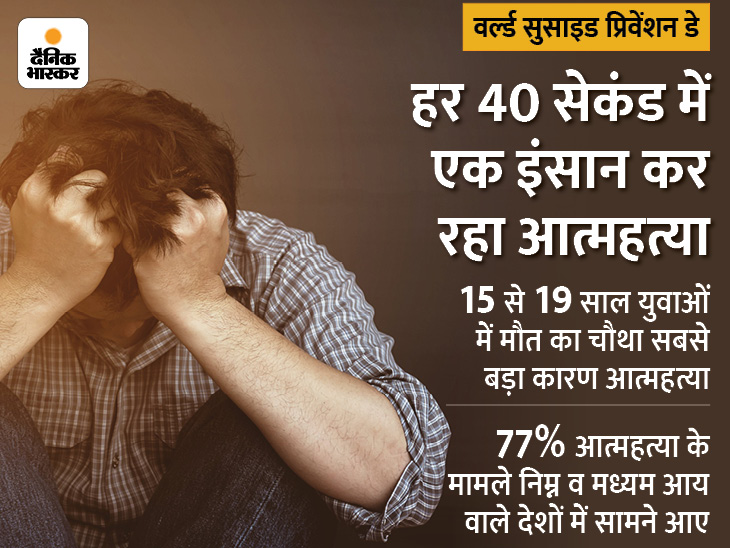 Suicide is the fourth leading cause of death among youth aged 15 to 19. Worldwide, more than 7 lakh people commit suicide every year. Out of this, 77 percent cases come from low and middle income countries. According to the World Health Organization (WHO), most people commit suicide by drinking pesticides, hanging and shooting themselves. Such cases can be controlled.

Why people are committing suicide: Old pain in the body is also the reason
According to the WHO, major causes of suicide are depression and alcohol use. Financial constraints, breakdown of relationship and diseases can become the reason for this. These are the 3 reasons for suicide-

How to prevent suicide cases
Dr. Santosh Bangar, Senior Consultant Psychiatrist at Global Hospital, Mumbai It is said that suicide cases can be prevented to some extent. Before committing suicide, some people can prevent it by understanding the specific symptoms. For example, they spend hours thinking about a problem, talking about committing suicide or looking for ways to commit suicide. They start feeling themselves as a burden on others or talk of committing suicide to get rid of pain/illness. Apart from this, preparing a will as soon as possible, writing goodbye messages, always being in depression, not picking up the phone, isolating yourself are the warning symptoms.

If someone around you sees such symptoms, do not ignore them. talk to them. Try to understand their point. Find a solution after listening to their problem. This diverts their attention and reduces the risk of suicide.

To prevent suicide cases, the WHO says, there is a need to keep pesticides, guns and certain drugs out of reach of all. Along with detecting it early from the early symptoms, such cases can also be prevented by understanding the behavior of the people.

Now talk about suicide cases in the country

How did this day start
On 10 September 2003, the International Association for Suicide Prevention (IASP) and the World Health Organization (WHO) took an initiative to prevent suicides worldwide. The first year of celebrating this day was successful, so in 2004, WHO officially announced its inclusion. In this way, this day is celebrated every year on 10th September. IASP organizes hundreds of events in more than 60 countries to prevent suicide cases.