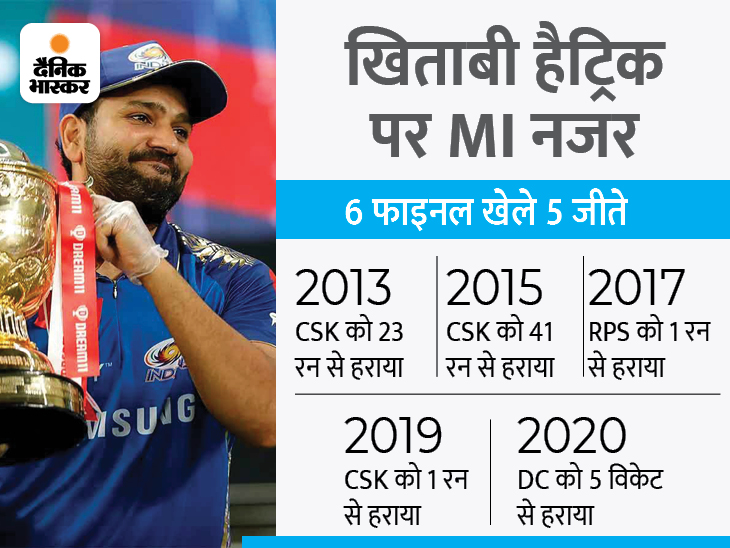 IPL Phase-2 is going to start in UAE from 19th September. Last year also due to Corona, the tournament was organized in UAE and Mumbai Indians team led by Rohit Sharma was successful in winning the trophy. This time too, the team is being considered as the favorite to win the title. Mumbai’s mixed performance was seen during Phase-1. The team played 7 matches and won 4 while the team had to face defeat in three. Currently, the team is at the fourth position in the points table with 8 points.

Rohit & Co is the only team to win the tournament for the most number of times in IPL history. In the last two seasons too, the team has been able to win the trophy and this time the eyes of the team will be on a hat-trick to win the title. In IPL-13, the team performed brilliantly on the grounds of UAE. The team has played a total of 21 matches in the UAE and has managed to win 11. The team’s win percentage on these grounds has been 52% and the best part is that the conditions are very pleasing to the bowlers of the team.

There has been no change in the Mumbai team in Phase 2. All the key players for the team will be available for the UAE leg. What can be the opportunities for the team in the remaining matches of IPL 2021 and what is the weakness of the team. In this article, we do SWOT analysis of MI team along with some such important points. That is, analysis of the team’s Strength, Weakness, Opportunity and Threat.

Strength – 1 Powerful batting
Mumbai Indians have the best opening pair in the form of Rohit Sharma and Quinton de Kock. Rohit and de Kock have led the team to victory many times by making great partnerships. The pair has always dominated the opposition team during the power-plays. Both the players are in good form at present. After this, T20 specialists Suryakumar Yadav and Ishan Kishan will be seen strengthening the middle order.

The team has Hardik Pandya, Kieron Pollard and Krunal Pandya as finishers. After having so many options in batting, the team also has an aggressive opener like Chris Lynn. Those who alone have the ability to change the picture of the match when given a chance.

Experience in bowling strength-2
Mumbai Indians have names like Jasprit Bumrah and Trent Boult in the bowling department. Bumrah and Bolt are considered to be one of the most dangerous pair in the world. Bumrah in the initial overs and Boult in the death overs give strength to the team with his bowling. Apart from this, Nathan Coulter-Nile has also done a good job for the team.

weakness
The weakest side of Mumbai Indians has been the spin bowling of the team. The team definitely has Rahul Chahar, Krunal Pandya, Jayant Yadav and Piyush Chawla, but the spin department of the team looks very weak if Chawla is left out. Krunal Pandya can curb runs but he is not adept at taking wickets. At the same time, Jayant Yadav does not get a chance to play more matches. In such a situation, the pressure of taking wickets on young Rahul Chahar increases. During Phase I, Chahar took 11 wickets in 7 matches.