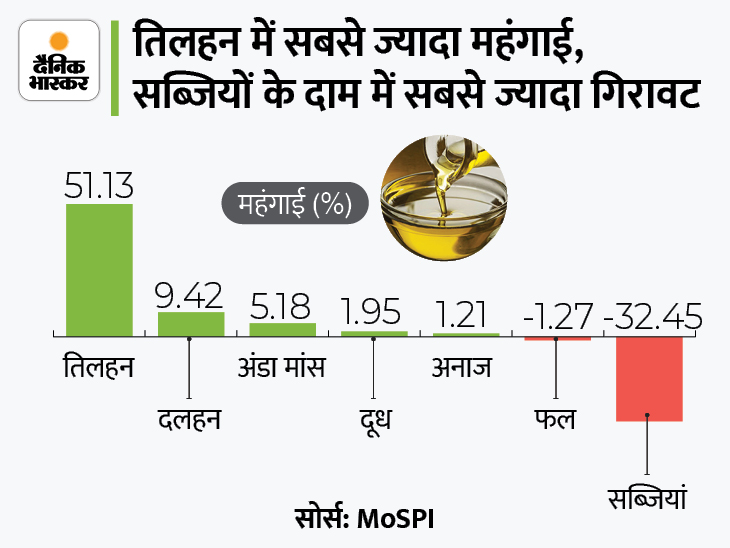 Wholesale inflation above 10% for the sixth consecutive month

Wholesale inflation remained above 10% for the sixth consecutive month in September, but food items became cheaper for the fifth month in a row. According to the statement of the Ministry of Commerce and Industry, “The reason for the higher wholesale inflation in September 2021 was the increase in the prices of mineral oil, base metals, non-food articles, crude oil and gas, chemicals and chemical products.”

Food prices declined by 4.69% year-on-year in September. In August also, food inflation remained negative at 1.29% due to falling vegetable prices. However, last month, pulses prices jumped 9.42% year-on-year. The highest inflation rate of 24.91% was in the fuel and power basket as against 26.09% in August. Crude oil and natural gas prices jumped 43.92% last month, compared to a year-on-year increase of 40.03% in August. Oilseeds saw the biggest jump of 51.13% in September, while the wholesale prices of vegetables saw the sharpest fall of 32.45%.

RBI fixes key policy rates according to the inflation rate. But for that, he makes the basis of retail inflation, not wholesale. Retail inflation in September stood at 4.4%, a five-month low. RBI had kept key rates – repo and reverse repo – at record levels last month. The rate at which banks take short term loans from RBI is the repo rate. The reverse repo rate is the opposite.