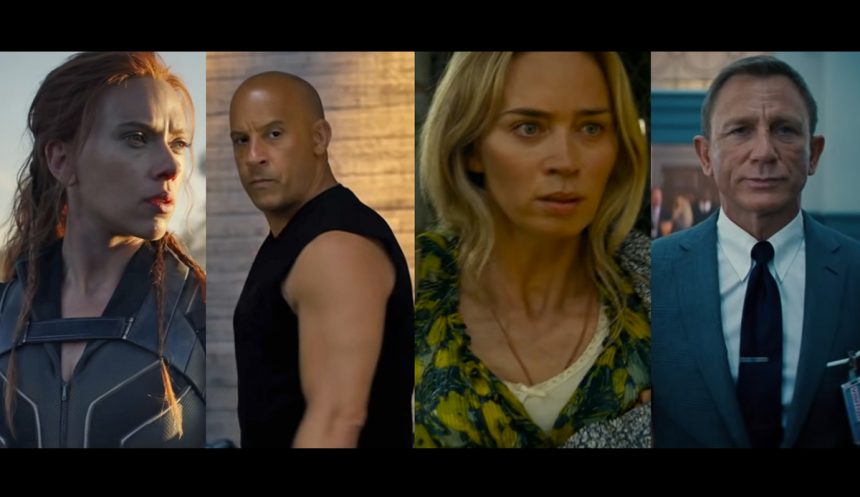 The coronavirus has turned 2020 upside down, and one of the most unexpected victims is the film industry.

With public gatherings becoming increasingly dangerous during the pandemic, movie theaters in highly affected areas like China and Italy are shuttered. France has created a limited seating ban, allowing people only to sit in every other row. In the US, movie theaters are still open — though that could easily change. Early predictions already have the global box office taking a hit north of $5 billion this year due to precautions around COVID-19.

It’s not surprising many studios have decided to wait it out, holding back their big properties until this is all over. So, which movies have been delayed? Which blockbusters are still on their way to cinemas near you soon??

No Time To Die

No Time To Die, AKA the 25th James Bond film (and Daniel Craig‘s final outing in the role), was intended to premiere March 31 and hit North America shortly after on April 10. However, Bond’s worldwide appeal is a big part of its success, and the film would also have been accompanied by an international press tour — something highly inadvisable under current circumstances. So the film was moved to November.

In a statement, the team behind Bond said:

“MGM, Universal and Bond producers, Michael G Wilson and Barbara Broccoli, announced today that after careful consideration and thorough evaluation of the global theatrical marketplace, the release of No Time to Die will be postponed until November 2020.”

It was the first but far from the last.

Status: Moved Up One Week

This one is actually coming sooner. Rather than delay the animated sequel, Universal actually moved it up into the date made empty by the delayed Bond movie.

Did y’all know there was a Peter Rabbit sequel coming? And that it was subtitled The Runaway??

If the family film was on your radar — and especially if your kids were looking forward to it — we have some bad news. The film was meant to debut domestically on April 3, but Sony decided to play it safe and hop over to August.

The sequel to the 2018 horror hit was supposed to come out on March 20, but just over a week out, Paramount decided to pull the film. In a statement, the studio said:

“After much consideration, and in light of the ongoing and developing situation concerning coronavirus and restrictions on global travel and public gatherings, Paramount Pictures will be moving the worldwide release of A Quiet Place Part II. We believe in and support the theatrical experience, and we look forward to bringing this film to audiences this year once we have a better understanding of the impact of this pandemic on the global theatrical marketplace.”

“To all our A Quiet Place fans, one of the things I’m most proud of is that people have said our movie is one you have to see all together. Well due to the ever-changing circumstances of what’s going on in the world around us, now is clearly not the right time to do that. As insanely excited as we are for all of you to see this movie… I’m gonna wait to release the film til we CAN all see it together! So here’s to our group movie date! See you soon! #AQuietPlacePart2… Take2.”

With its obvious international appeal, this was a no-brainer decision from Disney.

Mulan, with its cast of Chinese and Chinese-descended actors, including stars Donnie Yen and Liu Yifei, could easily become one of the highest grossing Hollywood movies in Chinese history — but only once the nation’s movie theaters are open again.

The film already had its premiere, and early critical reactions on social media have been overwhelmingly positive, so we’re sure Disney want to get this one out as soon as possible — but as of now have no new release date picked out to replace the rapidly approaching March 27 one.

This smaller studio comedy might not have been on your radar either, but The Lovebirds was also meant to bow this Spring, on April 3. However, at the same time they moved A Quiet Place, Paramount also pushed back the Kumail Nanjiani/Issa Rae vehicle. We still don’t know how long the delay will last.

This X-Men spinoff was never the safest bet to keep its date. The movie was already pushed back from its original April 2018 release date by 20th Century Fox, who said it needed reshoots to meet studio notes — reshoots which never happened amid the big merger with Disney. Now the Mouse House has, per the director, decided the film is just fine the way it always was, even if it doesn’t fit in with the rest of their Marvel Cinematic Universe.

However, the cursed film — which was finally going to see the light of day on April 3 — is now being delayed for the fifth time due to the coronavirus. No replacement date has yet been set.

The ninth Fast & Furious film is coming to you the slowest. The blockbuster was meant to blast the box office in on Memorial Day, but Universal decided to delay the next installment of its biggest moneymaker franchise almost a FULL YEAR!

In a statement all about family, producers wrote on Facebook:

“To our family of Fast fans everywhere, We feel all the love and the anticipation you have for the next chapter in our saga. That’s why it’s especially tough to let you know that we have to move the release date of the film. It’s become clear that it won’t be possible for all of our fans around the world to see the film this May. We are moving the global release date to April 2021, with North America opening on April 2. While we know there is disappointment in having to wait a little while longer, this move is made with the safety of everyone as our foremost consideration. Moving will allow our global family to experience our new chapter together. We’ll see you next spring. Much love, Your Fast Family.”

The Guillermo Del Toro-produced horror film was scheduled for April 17 but has also been pushed back indefinitely.

Sure to be one of the biggest films of the year, Marvel‘s highly anticipated Black Widow solo movie is, as of this writing, still on track to keep its date. However, based on the shift in dates for other Disney properties, we wouldn’t count on it. We can hope this will all be over by the time May rolls around, but we just don’t know what the future holds yet.