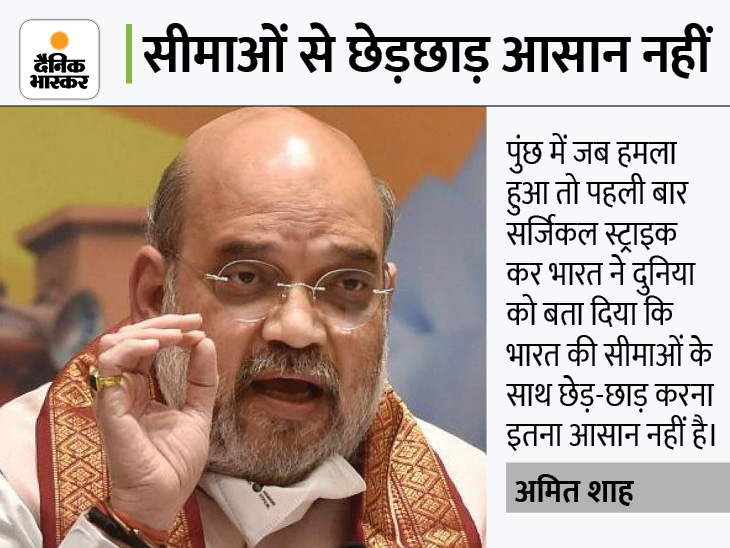 Union Home Minister Amit Shah was in Goa on Thursday. He once again attacked Pakistan for the recent terrorist activities in Kashmir. Shah said- Pakistan should not make the mistake of interfering in Kashmir. He stayed within his limits. If the neighboring country crosses its borders, then India will not hesitate to conduct another surgical strike.

Attack on country’s borders is not tolerated
Amit Shah laid the foundation stone of National Forensic Science University (NFSU) in Dharbandoda, South Goa. After this, while addressing a public meeting, he has said that attack on the borders of the country will not be tolerated.

He said, ‘When the attack happened in Poonch, for the first time by doing surgical strike, India told the world that it is not so easy to tamper with India’s borders. For the first time under the leadership of Narendra Modi and Manohar Parrikar, India proved the security and respect of its borders.

Apart from Congress, TMC and AAP are also in the electoral fray
Apart from the main opposition Congress, Mamta Banerjee’s TMC and Arvind Kejriwal’s Aam Aadmi Party are also in the fray for next year’s assembly elections in Goa. Mamta Banerjee has expressed her intentions by inducting former state chief minister and veteran Congress leader Luizinho Faleiro into the party. Mamta herself will also campaign in Goa.

Apart from this, Delhi Chief Minister Arvind Kejriwal is also preparing to woo the people with his promises. On coming to power, Kejriwal has made many promises including giving 80% jobs in the private sector to the local people, free electricity and water. At the same time, this time the party has given the command of Congress to P Chidambaram.