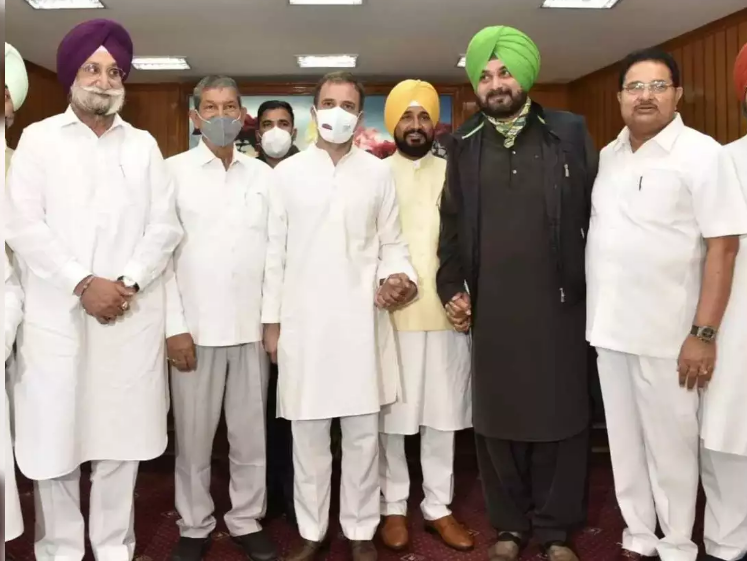 Navjot Singh Sidhu stood in front and Chief Minister Charanjit Singh Channi behind as he was photographed with Rahul Gandhi at the Raj Bhavan after the swearing-in ceremony of the new government in Punjab.

After the coup of Captain Amarinder Singh in Punjab, Charanjit Singh Channi became the new CM. The pictures taken during the Chief Minister’s visit to Punjab are more astonishing than Channi’s becoming the CM. In these pictures, Punjab Congress chief Navjot Singh Sidhu looks like a ‘super-CM’ with Channi behind him.

In his three-day tour of Punjab from the finalization of Channi’s name as Chief Minister to his swearing-in and after taking over as the Chief Minister, Sidhu was seen everywhere not only with him but also ‘guiding or driving’ him. Be it his first press conference after Channi became the Chief Minister or his visit to Amritsar, Sidhu remained ahead everywhere. These pictures of the ‘new government’ in Punjab have sparked many discussions. You also see these pictures….

When Charanjit Singh Channi became emotional in his first press conference after taking oath as the Chief Minister, Sidhu placed his hand on his shoulder several times and patted him.

Chief Minister Charanjit Singh Channi was seen making a way for himself in this way.

When Charanjit Singh Channi took over the chair of CM, Navjot Singh Sidhu was seen in full swing.

After becoming the Chief Minister, Charanjit Singh Channi reached Amritsar’s Golden Temple for the first time on Wednesday. Here in Sachkhand Sahib, Sidhu was seen sitting in the middle, Channi on one side and Deputy CM Sukhjinder Singh Randhawa on the other side.

Sidhu was carrying the hand of Charanjit Singh Channi, who arrived at the Golden Temple in Amritsar for the first time as a CM.

When Chief Minister Charanjit Singh Channi was talking to reporters in Amritsar on Wednesday, Sidhu put his hand on his shoulder.

Captain said – Sidhu is behaving like a super CM

Former Chief Minister Captain Amarinder Singh has also accused Sidhu of behaving like a ‘Super CM’. The Captain said that if Sidhu behaves like a super CM, then Punjab Congress will not be able to work. Describing Sidhu as a drama master, the Captain said that under his leadership, if the Congress wins even 10 seats in the assembly elections, it will be a big deal.

Mandeep Manna said – the dignity of the chair is being demolished

Former Punjab Congress spokesperson Mandeep Manna, who belongs to Amritsar, said that he has never seen any CM being treated in such a way that someone puts his hand on the CM’s shoulder. Sidhu calls her ‘Channi Bai’ or ‘Channi Mera Chhota Veer’. Deputy CM Sukhjinder Randhawa is called Sukhi Pa’ji and OP Soni is called Shasoni Sabash. By doing this the dignity of the CM’s chair in Punjab is being demolished.

Manna jokingly said that no man lives with his wife as much as Sidhu is living with CM Channi all the time.

After the resignation of Captain Amarinder Singh, the Congress high command wanted Sunil Jakhar to be the CM. Everything was decided but at the last moment Ambika Soni said that the CM of Punjab should be Sikh face only. After that some MLAs also raised the issue of ‘Sikh State-Sikh CM’. Then the high command finalized the name of Sukhjinder Singh Randhawa, but Sidhu was adamant that if only a Jatt Sikh wanted to be made the CM, he should be made. When there was no consensus on his name, Sidhu left the hotel in anger. However, after that the high command made Charanjit Channi the CM.

Rawat had said – next elections under the leadership of Sidhu

Charanjit Singh Channi did not even take oath after his name was finalized as the new Chief Minister that Congress’ Punjab in-charge Harish Rawat created a new controversy. Rawat said that the next assembly elections in Punjab would be held under Sidhu’s leadership. This statement of Rawat was first opposed by former Punjab Congress chief Sunil Jakhar. Jakhar said that this is like reducing the dignity of the post of CM. Seeing the growing controversy, the Congress high command later came on the back foot and party’s national spokesperson Randeep Surjewala had to clarify that the assembly elections would be led by Channi and Sidhu.