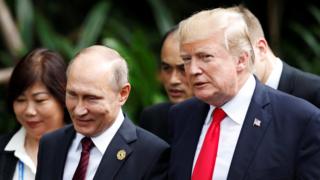 US intelligence agencies have warned that Russia is attempting to help President Donald Trump get re-elected in November, US media report.

The comments came in a closed-door briefing to the House Intelligence Committee on 13 February, officials told US outlets.

President Trump was reportedly enraged, complaining that Democrats would use the information against him.

He replaced his acting intelligence chief, Joseph Maguire, on Thursday.

The New York Times reported that Mr Trump was particularly angry that Adam Schiff, the Democrat who led the impeachment proceedings against him, was at the briefing.

Mr Trump, impeached by the House of Representatives for abuse of power and obstruction of Congress, was acquitted after a two-week trial in the Republican-controlled Senate.

During the House intelligence briefing, Mr Trump’s supporters argued that the president had taken a hard stance with Russia, and that European ties and security had been strengthened as a result, the newspaper added.

Mr Schiff later tweeted that if Mr Trump was in any way “interfering” with the sharing of information between US intelligence agencies and Congress regarding foreign interference in the election process, the president was “jeopardising” attempts to stop it.

Mr Maguire was a favourite to be nominated for the permanent Director of National Intelligence (DNI) post, the Washington Post said.

However, the paper said the president changed his mind when he found out about the briefing, and what he called the “disloyalty” of his staff.

The president announced this week that Mr Maguire would be replaced by Richard Grenell, the US ambassador to Germany and a Trump loyalist.

Image copyright AFP Image caption Richard Grenell, the US ambassador to Germany, was appointed the DNI this week

Two Trump administration officials told the New York Times that the replacement of Mr Maguire, so soon after the contentious briefing, was a coincidence.

US intelligence officials say Russia interfered in the 2016 presidential election to boost Mr Trump’s campaign and cause chaos within the US electoral process.

Democrats criticised the president for appointing Mr Grenell, who has previously played down the extent of Russian interference in the last election, and has celebrated the rise of far-right politicians in Europe.

Ned Price, a former aide to Mr Trump’s predecessor Barack Obama, said the president had “dropped the charade that he has any use for intelligence”.