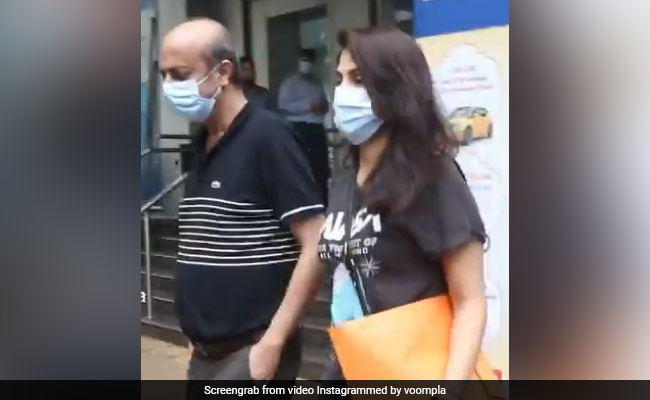 Bollywood actress Riya Chakraborty is now again active on social media as before. Riya had been away from social media for a long time after the death of Sushant Singh Rajput. However, now she has become normal and is constantly making headlines with her posts. Now a video of Rhea Chakraborty has surfaced again, in which she was seen with her father Indrajit Chakraborty in a bank in Bandra. On seeing Riya Chakraborty, a crowd of cameramen gathered during this time and everyone started requesting her for shots.

Rhea Chakraborty can be seen in this video that she is leaving the bank with her father, when some cameramen call Riya-Riya. But the actress ignores them and closes the gate of her car. Riya Chakraborty is seen in a hurry in the video. During this, the actress is looking very beautiful in black t-shirt and jeans.

Rhea Chakraborty had shared a picture of herself doing yoga in the past, which fans liked very much. Riya Chakraborty made her Bollywood debut with ‘Mere Dad Ki Maruti (2013)’. Riya started her career as a VJ with MTV India. She made her acting debut in 2012 with the Telugu film ‘Tuniga Tuniga’. Recently Rhea Chakraborty’s film ‘Chehre’ with Amitabh Bachchan and Emraan Hashmi has been released.