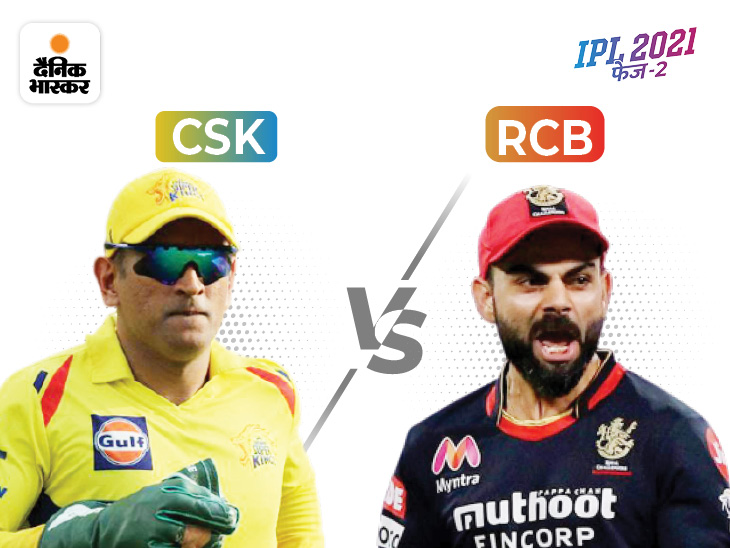 Chennai Super Kings (CSK) will face Royal Challengers Bangalore (RCB) on Friday in Phase-2 of the Indian Premier League (IPL-2021). Chennai are currently second in the points table with 12 points from 8 matches. Victory in this match will again take him to number-1. At the same time, the team of Bangalore will forget the defeat against Kolkata in the last match with the intention of returning to the track again. RCB captain Virat Kohli can also complete his 10,000 runs in T20 cricket in this match.

RCB’s batting trio was a flop in the last match
Glenn Maxwell and AB de Villiers batted well in Phase-1 of IPL-2021, but both of them flopped in Phase-2 match against Kolkata. At the same time, captain Virat Kohli was also dismissed after scoring just 5 runs. If these form Chennai are to be challenged, then this batting trio of Bangalore will have to show their flair.

Rituraj can set the claw of fifty in UAE
Rituraj Gaikwad scored an unbeaten 88 off 58 balls in the match against Mumbai Indians. This was his fourth consecutive fifty in the UAE. Chennai’s team will now expect 50+ innings from him for the 5th time in a row.

Sam Curran can get a place in the playing-11
Sam Karan has ended the mandatory quarantine period in the UAE. That is, they are available for selection. The question is, who will have to sit outside for them? Faf du Plessis, Moeen Ali, Dwayne Bravo and Josh Hazlewood played in the last match in four overseas players of Chennai. Ambati Rayudu suffered a hand injury against Mumbai. However, the X-ray report did not confirm the fracture of his elbow bone. If Rayudu is not fit, Robin Uthappa can be included in the playing-11 in his place.

Raina weak in front of fast bowling
Suresh Raina has scored only 61 runs against fast bowlers in IPL 2021 so far. Strike rate is only 91. At the same time, against spinners, he has scored 66 runs with a strike of 183. That is, when Raina comes to bat, Virat can use Jameson or Siraj against him.

AB did not play openly against spinners
AB de Villiers is called Mr 360 of cricket. That is, they are capable of playing the best shots in every corner of the ground. However, in the last few seasons, one weakness of his has emerged. Since 2019, AB has scored runs in front of spinners in IPL at an average of 20.7 and strike rate of 112. So when AB comes out to bat, it is possible that Dhoni will give the ball to a spinner.