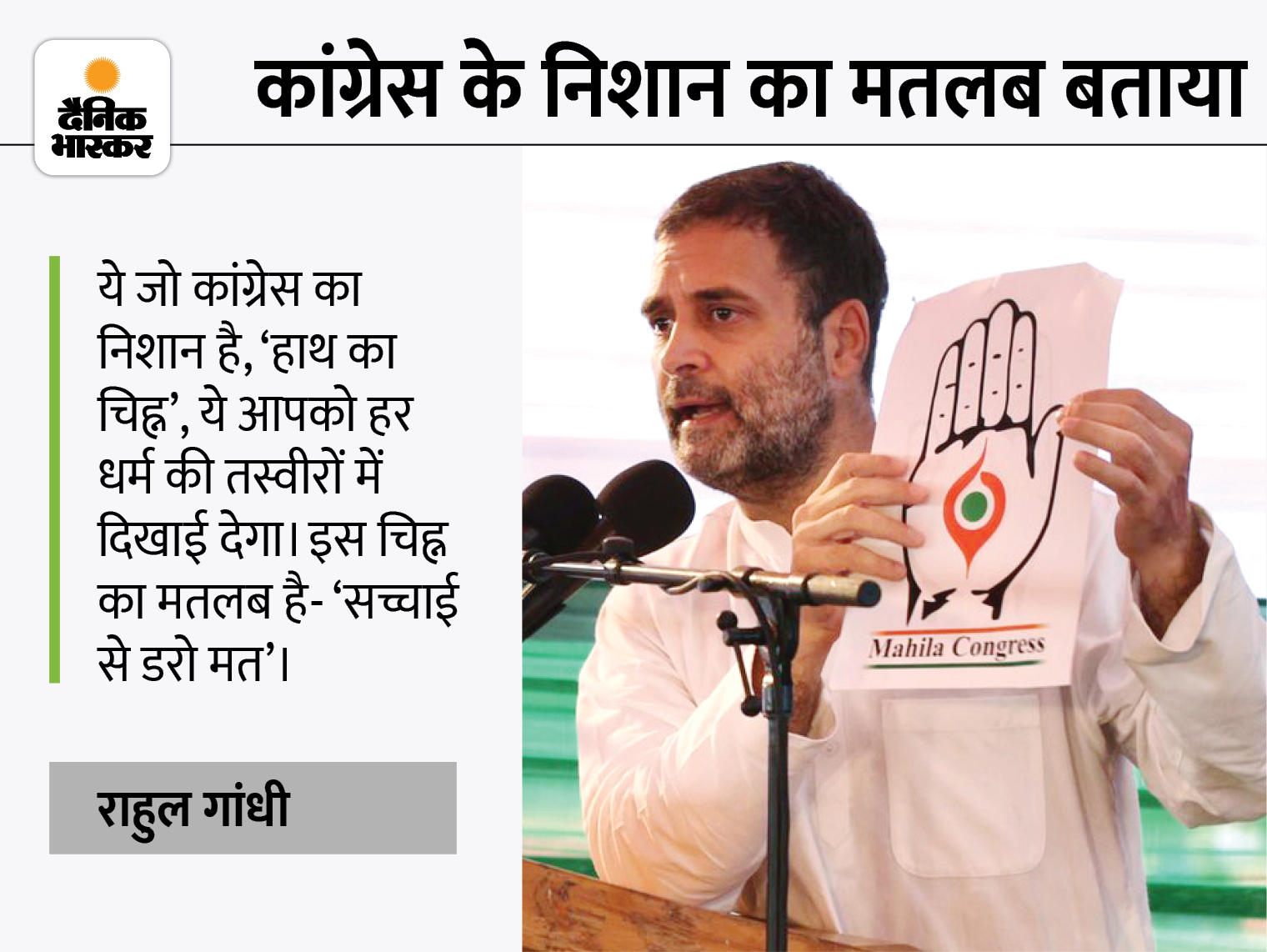 Rahul said that by implementing RTI, we put the power of Durga in the hands of crores of people. He said that BJP people call themselves Hindu party and attack Lakshmi and Durga all over the country. These are false Hindus. They use Hinduism. They broker religion. Rahul said these things in a program organized in Delhi on the foundation day of Mahila Congress. Read, 8 big things of Rahul’s speech …

2. Why did RSS ideology shoot 3 bullets in the chest of that Hindu?
People of BJP and Sangh say that they are Hindu party. In the last hundred-two hundred years, if any one person has understood Hinduism and made it his practice, then the name of that person is Mahatma Gandhi. We also believe this and the people of BJP-RSS also believe it.

If Mahatma Gandhi understood Hindu religion and he spent his whole life in understanding Hindu religion, then why did RSS ideology shoot three bullets in the chest of that Hindu? Which the whole world considers as an example. From Nelson Mandela to Martin Luther King, Mahatma Gandhi was an example and Gandhi best understood and taught non-violence.

4. Connected Lakshmi and Durga with the plans of BJP and Congress
While connecting Lakshmi and Durga with today’s politics, Rahul said- The job of a politician is to bring the powers of Durga (protection) and Lakshmi (goal) to every person. It is the job of every politician to put the power to fulfill the goal in every person’s house without any discrimination. I said something wrong? Is the car running on the right track?

Now I ask the question… When Modi ji did demonetisation, did he increase or decrease the power of Lakshmi in the homes of our mothers and sisters? No less…. When Narendra Modi ji implemented three laws on farmers, did he take away the power to fulfill the goal from them or gave them?… When GST was implemented. He put or took out Lakshmi and Durga in the house of small shopkeepers? And when the Congress party implemented MNREGA, then put or took out the power of Lakshmi in the homes of crores of people? When we implemented RTI, did we put the power of Durga in the hands of crores of people or not? When did we fight for the constitution? If given one man one board, then we increased or decreased the power of Durga? Is Lakshmi’s power more or less? …so what’s going on?

The Congress MP described women as the form of Lakshmi and Durga.

6. Surrounded the media, said – they will not show my speech on TV
Rahul also surrounded the media in his address. He said that the speech I am giving now. It can’t even play on TV. There are many media colleagues here. Ask him will this speech be played on his channel? I tell you, it can’t go on. At this the crowd started laughing.

Targeting BJP, Rahul said that he will not make any woman PM.

7. Women used to live around Mahatma Gandhi because of this..
Rahul Gandhi further said that in the pictures of Mahatma Gandhi, you must have seen that there were two-three women around him. Have you seen any woman around RSS chief Mohan Bhagwat? This is because Congress respects women and gives them platform. Modi and RSS cannot give a woman prime minister to the country. Congress has done this.

8. Congress symbol hand connected with every religion
Rahul released the new logo of Mahila Congress on the foundation day. He also asked the meaning of the people present in the meeting and in the last he himself told about it. Rahul said that you have a hand in front of the pictures of Lord Shiva, Mahavir, Buddha, Guru Nanak, Jesus Christ, Sai Baba. In Muslim religion the mark is not allowed, but when you ask Allah for something, you ask with your right hand. So this hand..the right hand is visible everywhere. This hand means… don’t be afraid of the truth. Congress is not afraid of anyone.