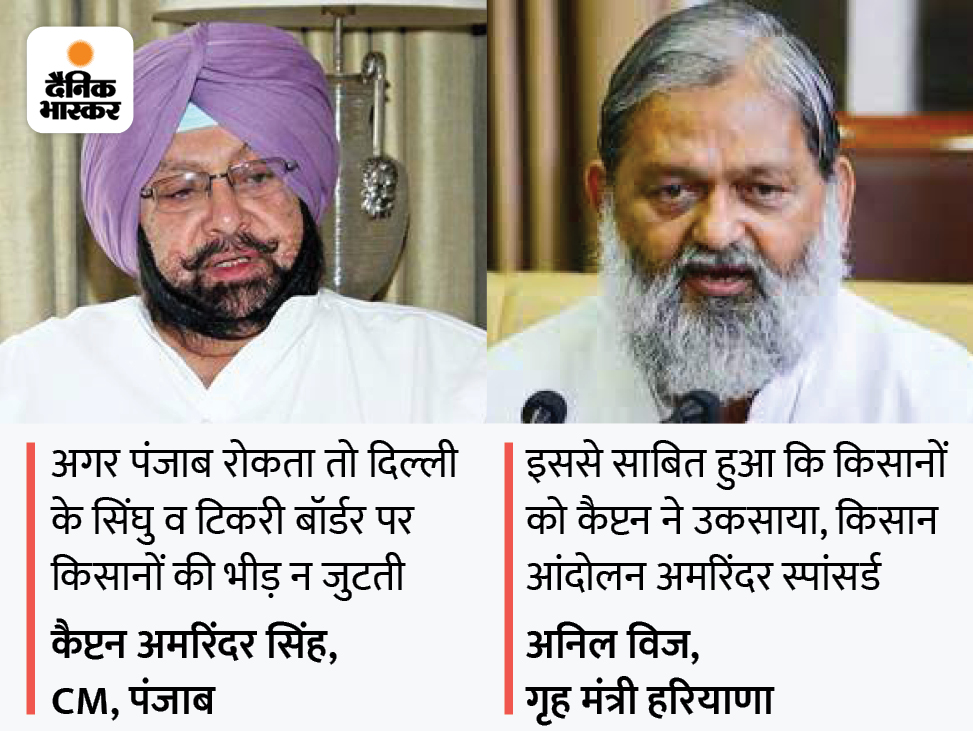 A political storm has arisen in Punjab and Haryana due to the statement of Chief Minister Captain Amarinder Singh appealing to the farmers not to agitate in Punjab. In Punjab, Akali Dal and Aam Aadmi Party have raised questions on Captain’s being farmer friendly. On the other hand, Haryana Minister Anil Vij has accused Captain of instigating the farmers. The Captain was seen standing with the farmers’ movement till now. But farmers’ organizations have also been angry with his statement. They say that Captain Modi has started advocating for corporate houses like the government.

Farmers movement is an important issue in Punjab Election 2022. In such a situation, everything said on this is taking a political tinge. All political parties want to stand themselves in favor of farmers. However, in Punjab, the Congress remained completely in favor of the farmers till now. The Captain has also raised this issue in Delhi with Prime Minister Narendra Modi and Home Minister Amit Shah. He has also spoken about finding a solution to the movement through social media. With this statement of his, Congress has now come under attack from opponents and farmer leaders.

Had Punjab stopped, crowds would not have gathered at Singhu and Tikri borders: Captain

During the program in Hoshiarpur, Captain Amarinder Singh said that farmers should not agitate in Punjab. They should also think about the economic condition of Punjab. Farmers have started dharnas at 113 places in Punjab. Due to this the economic condition of Punjab is getting worse. The Captain even said that if the Punjab government had stopped, the farmers would not have been able to gather at the Singhu and Tikri borders in Delhi. Farmers do whatever they want in Delhi and Haryana to put pressure on the Centre, but do not harm Punjab.

Haryana Home Minister Anil Vij said that it is very irresponsible statement of Punjab Chief Minister Captain Amarinder Singh that whatever you want in Haryana, Delhi, don’t do it in Punjab. This means that he wants to disturb the peace of the neighboring states of Haryana and Delhi. This proves that the Captain has done the work of instigating the farmers for the movement. Vij said that the farmers’ movement is sponsored by Captain Amarinder Singh.

Senior Akali Dal leader and former Union Minister Harsimrat Kaur Badal attacked the Captain through a tweet. Harsimrat said that Captain Amarinder Singh is telling the farmers not to fight their battles in Punjab. The Captain rests in his luxurious palace and the farmers have been on the streets of Delhi for the last 10 months even in bad weather. Was this his ie Captain’s plan?

Captain separating Punjab from agitation: AAP
Aam Aadmi Party’s Punjab in-charge Jarnail Singh said that the farmers of Punjab have started the farmers’ movement. If things did not work out in Punjab, they went to Delhi and sat down. The Captain has talked about breaking the ties of Punjab with the movement. The movement which has pummeled the central government, the Captain should have talked about their encouragement.

The leaders of the United Kisan Morcha, who are leading the agitation, are also objecting to the statement of Captain. Farmer leader Manjit Rai said that in Punjab only malls and toll plazas have started dharna. If the Captain wants to remove the farmers from there, then tell whether he is with the farmers or the well-wishers of the corporate world. Had the Captain listened to the same talk of the farmers, we would not have had to jam the highway to increase the rate of sugarcane.