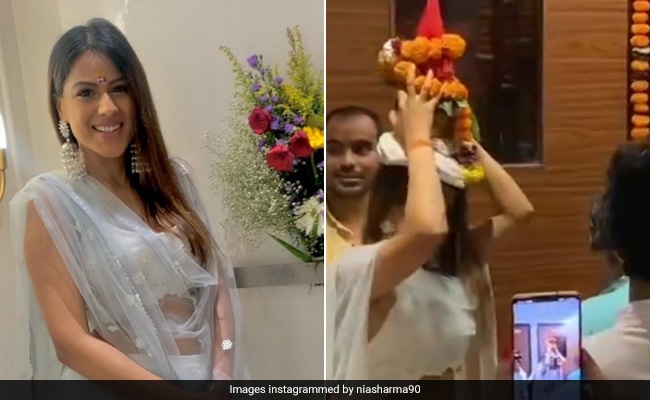 Actress Nia Sharma, who made a splash in the TV industry, dominates the social media these days. Sometimes their photos and sometimes videos create a ruckus on the internet. Nia has emerged as a popular face of social media these days. For the time being, let us tell you that today is a very special day for Nia, because Nia has entered her new house. Recently, Nia Sharma has shared very beautiful pictures of her ‘Nia Niwas’. Which are becoming increasingly viral on social media.

Nia shares pictures of Nia Niwas
Nia Sharma took her beautiful house in Mumbai on the occasion of New Year. At the same time, he has entered the house on a special occasion. He has shared some pictures of the house on his official page. Along with this, videos of Griha Pravesh and pictures of Havan have also been shared on his fan page. Which fans are very much liked. Nia’s fans are congratulating her fiercely. On this recently shared post of Nia, many celebs including Bharti Singh, Surbhi Jyoti, Priyank Sharma, Vishal Singh have praised her.

Popular face is Nia Sharma
Talking about the work of the actress, Nia Sharma started her career with the TV serial “Kali”. Nia got recognition on TV from the serial “Ek Thousand Mein Meri Behna Hai”. After this, Nia played the character of Roshni Patel in Zee TV’s serial “Jamai Raja”, which earned her stardom on the small screen. Along with this, Nia was also seen in the reality show ‘Khatron Ke Khiladi’ and Vikram Bhatt’s web series ‘Twisted’.