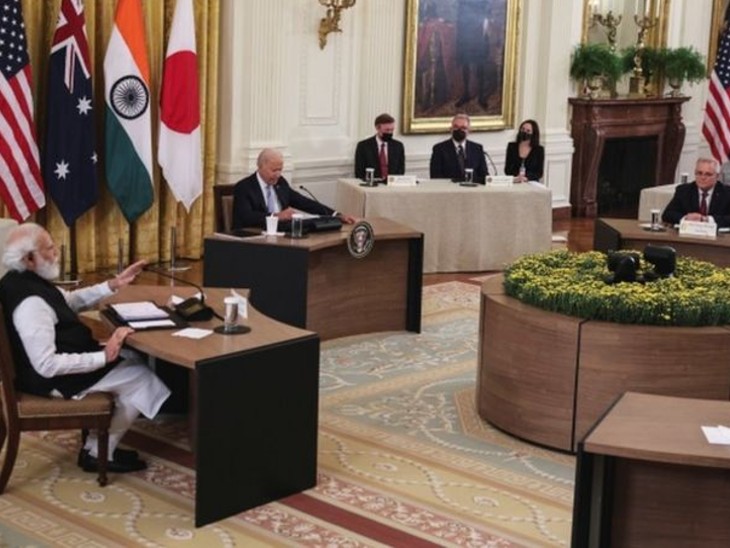 PM Modi said that I am confident that our cooperation in QUAD will ensure peace and prosperity in the Indo-Pacific as well as in the whole world.

Prime Minister Narendra Modi met President Joe Biden and Vice President Kamala Harris during his US visit. These meetings are being discussed a lot in the Indian media, but the American media is not showing much interest in Modi’s visit. There is a lot of discussion about the quad meeting in other countries of the world including America.

American newspaper The Washington Post wrote that Biden or any of his guests did not name China or Beijing during this meeting. Nothing was said openly on China in his agenda. Biden said that the first major initiative of this group is to distribute one billion doses of corona virus vaccine made in India, which is on the right track. However, international watchdogs have expressed doubts about this.

The newspaper writes that after America’s exit from Afghanistan, the focus of the Biden administration is now on China. For this he has to address India’s concerns. It is facing competition from China. At the same time, the US remains under threat from Islamist extremist groups in Pakistan and Afghanistan, whom India also sees as enemies.

Wall Street General wrote – Quad countries increased the possibility of agreement
The American newspaper Wall Street General has also mentioned the QUAD conference. The newspaper writes that the event organized in the mid-2000s under the name of Quadrilateral Security Dialogue has become a group today. After the meeting, the possibilities of agreement in many areas between the quad countries have increased. Security experts have been quoted as saying that the latest changes show the need to show solidarity.

India raised the issue of terrorism in the QUAD meeting
The first in-person meeting of the heads of states of India, America, Japan and Australia took place at the White House on Friday. Prime Minister Modi, who attended the meeting, thanked Biden for convening the first in-person meeting of the QUAD. He said that our Vaccine Initiative will be of great help to the Indo-Pacific countries. According to Foreign Secretary Harsh Vardhan Shringla, India raised the issue of Pakistan’s role in Afghanistan and involvement in terrorism in the QUAD meeting.