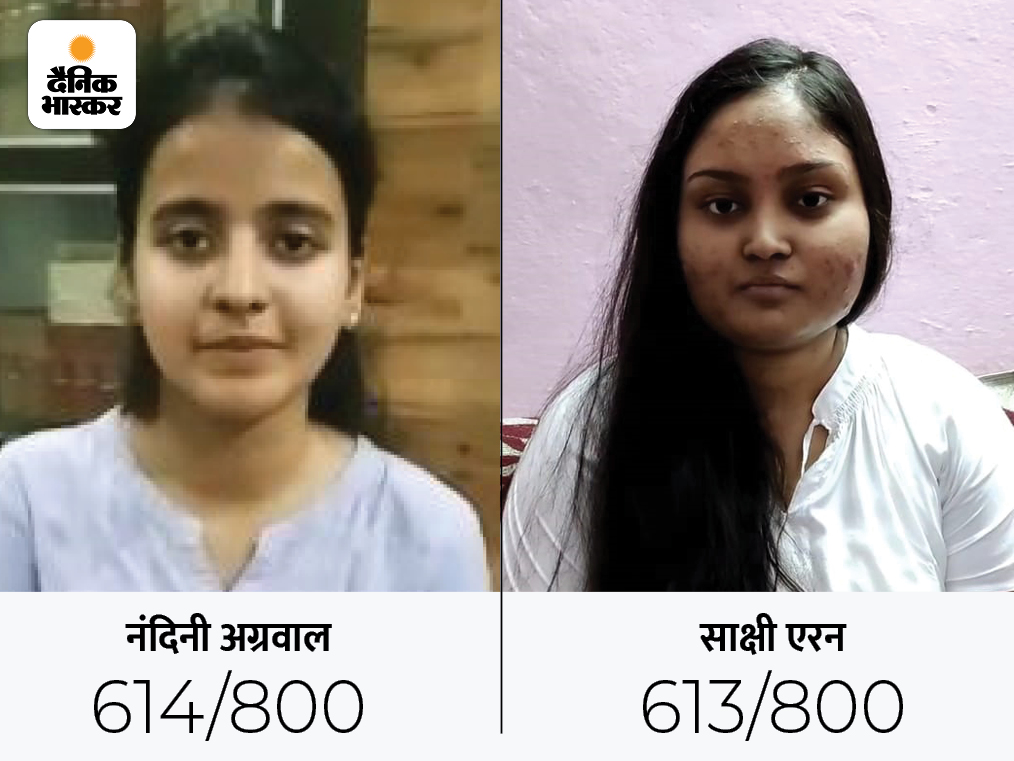 Two daughters of Madhya Pradesh have brought laurels to the state by securing first and second rank in All India Institute of Chartered Accountants of India (ICAI). Nandini Agarwal of Morena secured AIR-1 rank with 614 (76.75%) marks out of 800 and Sakshi Aron from Indore secured AIR-2 rank with 613 (76.63%) marks. Both have worked hard to achieve this position. Nandini distanced herself from social media, while Sakshi Aron used social media only for information. Know the story behind the topping of both the daughters…

Nandini took inspiration from her mother
Nandini’s father Naresh Chandra Gupta is a tax consultant in Morena. Mother Dimple Gupta is a housewife. Nandini tells that her mother is a graduate in commerce. Taking inspiration from him, he decided to become a CA, as there is a commerce environment in the house, which helped a lot. In 2017 he had given the entrance exam of CA. To prepare for the exam, from September last year, more emphasis was placed on studies. She used to study for about 14-15 hours a day. Completely kept distance from social media.

Nandini Agarwal with her brother Sachin and mother Dimple Gupta.

Time management had to be done during articleship
Nandini says that Gurgaon’s MNC company PWC and CW articleship in India. During this time I had to work for 7-8 hours. After coming from there, I could study only for three to four hours. Nandini took online classes. From September last year, full focus was on studies. As a result, 19-year-old Nandini secured the All India Rank in the very first attempt.

Father said – does not take interest in teaching girls in Chambal
Nandini’s father Naresh Chandra Aggarwal says that people in Chambal division are not interested in teaching girls much, but they taught the daughter. He got the family background of CA. For this reason, both the siblings prepared for the CA exam.

Sakshi Aron – wanted to become an astronaut, became a CA
Sakshi, a resident of Indore, wanted to become an astronaut in her childhood, but took commerce after 10th because she did not like bio. Scope was not visible in engineering, so he took commerce. Started preparing for CA after 12th. She said that now she wants to work in corporate for the next 2 years. After this she is considering MBA studies, although she is also preparing for Chartered Financial Analyst of USA.

Sakshi told that during the 3 years of articleship training, she took training for two and a half years at Anand Saklecha & Co. After this, she is taking training as an industrial trainee at Hindustan Unilever for a year. Due to this, he had to do a lot of time management for studies. She used to study daily from 5.30 am to 10 am for her CA studies. After this, after training in the afternoon, she would return home in the evening. He used to study again from 9 o’clock to 12 o’clock in the night.

On Sakshi’s success, her parents made her face sweet.

benefit of lockdown
He told that during the Corona period, he benefited a lot in the lockdown, because due to work from home, traveling time was saved. Managed that time and studied, although he also did private coaching from December 2018 to January 2021. She used to study for 8 hours during the Corona period. His sister also supported a lot. His younger sister Soumya used to keep his books and belongings in the right place so that he could get his books on time. However, she did not stay away from social media much. Use social media as much as needed.

didn’t expect
Sakshi says that she never kept her hopes up. Prior to this, she has also been an All India Topper in Chartered Accountants Intermediate. Even at that time, he had not kept hope. This time after the result came, all he had to do was to pass. Sakshi told that she only focused on studies and achieved this success. After the result, they checked the merit list.

father had full hope
Sakshi’s father Bhupendra Aron told that he was hopeful that the daughter would come in merit. After the results came and the daughter got the All India Second Rank, her face lit up with happiness. After this success of Sakshi, the house was decorated. Sakshi’s friends also came to her house to congratulate her.

Ratan Mishra from Morena and Amit Salgat from Indore