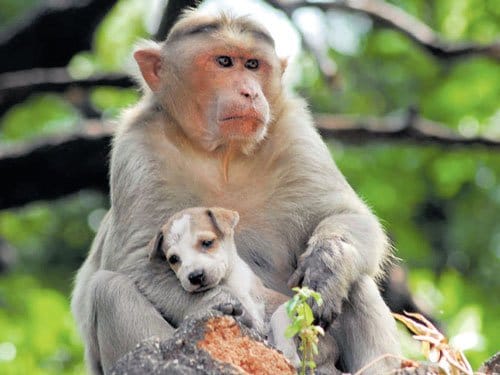 Monkey is an animal that is very naughty and mischievous. It is so fickle that everyone is very happy to see it. On social media, we keep seeing viral videos of monkeys (Monkey Kidnapped Puppy). Monkeys sometimes trouble humans and sometimes animals. One such video is becoming increasingly viral on social media. But this viral video is very different and shocking from other videos. In the viral video (Social Media Viral Video), it can be seen that a monkey is carrying a puppy on a tree. If media reports are to be believed, the monkey has been in possession of the puppy for three days. After watching the video on social media, people are saying that the monkey has kidnapped Puppy.

This matter is being told of Malaysia. According to media reports, this entire incident is of 16 September. The name of this puppy is being told as Saru. Saru was separated from his mother by the monkey just two weeks ago. The monkey kidnapped Saru and tried to befriend him. He was sticking the puppy to his chest. He did not harm the monkey in any way. In the end, with the help of the authorities, the puppy is rescued.

This video is going viral very fast on social media. After watching this video everyone is scolding the monkey. One user said- Such an act of monkey could have killed the puppy. At the same time, another user said – we have never seen such a raging monkey.