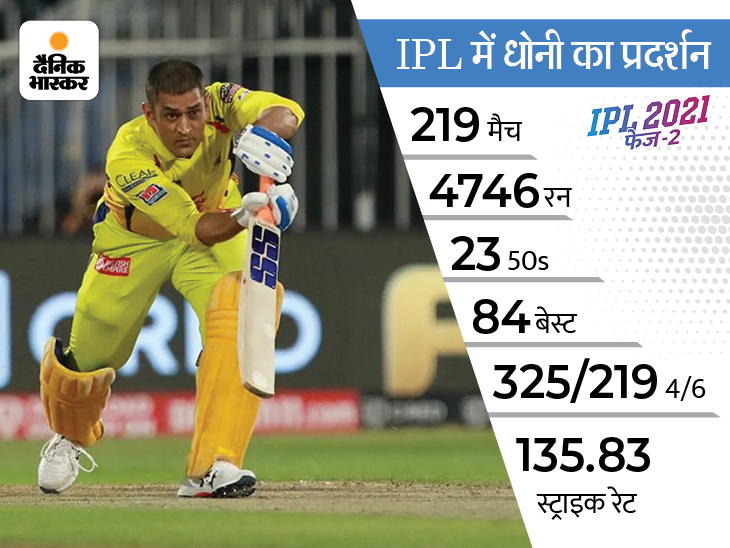 Chennai Super Kings (CSK) captain Mahendra Singh Dhoni’s final match against Kolkata Knight Riders (KKR) could be the last. A few days ago, Dhoni had said that even he does not know in which role he will be seen next season. Captain Cool Dhoni, who took CSK to the final for the 9th time, batted amazingly in Qualifier-1 against Delhi Capitals. He scored 18 runs in 6 balls and took Chennai to the final on the strength of his batting.

Next year there is going to be a mega auction regarding IPL. Which team will retain the number of players for the mega auction, it is still under wraps. In such a situation, whether Dhoni will be a part of Chennai’s team or not is a big question and the match against KKR can also be his last match.

Dhoni himself gave hints
Recently, during IPL 2021, MS Dhoni made a big statement about his future in IPL during the toss in the match played against Kings XI Punjab. He had said that he himself does not know whether he will be a part of CSK as a player in the next season of IPL.

According to former Indian captain- You will see me in yellow jersey, but will I play for Chennai, I don’t know. There are many uncertainties regarding this. The direct reason for this is that two new teams are coming in the IPL. Right now no one knows anything about the retention policy. We don’t even know how many foreign players or how many Indian players the team can retain. The amount (money cap) of each player is also not known. You can’t decide on it until the rules are made. So we have to wait for it and hope it will be good for all.

Dhoni is out of touch for a long time
Dhoni’s bat has not been able to do anything special since the last 2 IPL seasons. Dhoni made the last fifty in the IPL in the 2019 season. Talking about the last season, he scored only 200 runs in 14 matches at an average of 25. At the same time, in the current season, only 114 runs have been seen with his bat at a simple average of 16.29.

Will you see Dhoni style again?
It is well known that Dhoni has always been known for his brilliant decisions. He announced his retirement from Test cricket in the middle of the series during the 2013-2014 tour of Australia. In 2017 too, he surprised everyone by suddenly leaving the captaincy of ODIs and T20s. There were talks of his retirement after the 2019 ODI World Cup, but he took a long break from international cricket after the World Cup and then suddenly announced his retirement on the occasion of 15 August.

This time Dhoni’s style can be seen in IPL also. Now nothing can be said on whether Dhoni will play next year or not, but it is certain that the entire team of Chennai Super Kings will be desperate for him to win the tournament this time.