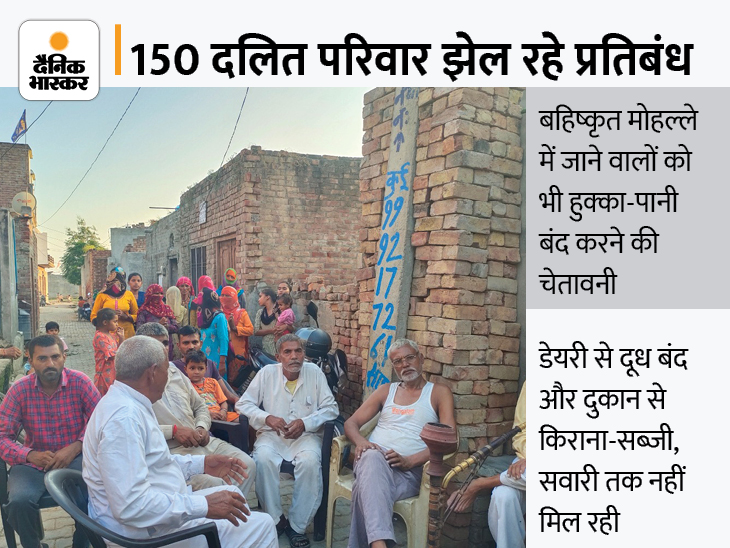 Due to the boycott, the elderly sitting in Mangu Bagad locality of village Chhatar

150 Dalit families of Chhatar village of Uchana assembly constituency of Jind, Haryana are facing social boycott for 15 days. The reason behind the boycott is such that a Dalit youth had given a complaint to the police against the bullies who beat him up. To create pressure, the Dabangs had announced by doing Panchayat that the boycott would continue till the unconditional complaint was withdrawn. A social worker has sent a written complaint to the Chief Minister in the matter.

The people of Mangu Bagad, a locality of Chhatar village, are also prohibited from going to other places in the village. At the same time, if anyone goes towards the excluded locality, he has also been warned to shut off the hookah water socially. Farmers are not able to go to the field and shopkeepers are not even providing groceries and vegetables. Milk is not being given in the dairy. If someone tries to go out of the village, they are not getting a ride because of the boycott.

Due to not being able to go out of the locality, people are forced to sit in the street.

Went to watch kabaddi match on 10th September and got beaten up
Lahiri Singh (70), an elderly man of Mangu Bagad locality, told that on September 10, Gurmeet went to see a kabaddi match at the sports fair. There he was beaten up by Rajesh son Billu of the village and many of his associates. Gurmeet gave a complaint of assault to the police. On coming to Gurmeet’s house, the relatives of the accused youths along with some people of the village came to the locality and started threatening them. He pressurized Gurmeet to withdraw the case. Gurmeet had agreed, but he was repeatedly threatened.

were making pressure to withdraw the complaint
Lahiri Singh said that an attempt was made to create such an atmosphere that Gurmeet has committed a crime by registering a case. On constant pressure, Gurmeet refused to withdraw the case. After Gurmeet’s refusal, a collective panchayat of the village was held on 26th. In this panchayat, it was announced to boycott the entire locality of Gurmeet, Mangu Bagad. After that day they are not even allowed to enter the fields. At the same time, Praveen Kumar (32) said that Gurmeet, the boy of the locality, gave a complaint to the police against the assault. The police registered a case under the SC / ST Act and took the accused youth Rajesh into custody. This angered the upper caste people of Chhatra village. He is demanding that Gurmeet withdraw the case unconditionally. If the case is not withdrawn, the social boycott of the locality will continue.

Children are also being forced to play in the streets of the locality.

Pride in understanding the case
Rohtash Kumar (43) of the locality told that the upper caste people of the village are of the opinion that Gurmeet has played a role in his pride by registering a case. That’s why he has imposed the boycott decision to teach a lesson to Gurmeet and the society. An announcement was made in the village that Gurmeet should be left alone. All the people of his society should be separated from him. If this happens then everyone along with Gurmeet will have to face boycott. According to Rohtash, there have been fights with the people of his locality in the past as well. He used to keep quiet considering this as his policy as his livelihood is largely dependent on the upper caste people of the village.

Written complaint has been sent to the Chief Minister
At the same time, Dinesh of Khapar, an activist village in the area, has sent a written complaint to the Chief Minister of Haryana, Manohar Lal. He has demanded that action should be taken on this matter seriously so that the Dalit families get justice. He told that a similar case has come to the fore in village Khapar, where Dalits are being suppressed. In this regard, a request has been made to the Chief Minister for justice. At the same time, according to ASI Dilbag Singh of Uchana police station, an FIR has been registered in the case of Chhatar village. The investigation of the case is still on. Police will take action soon.