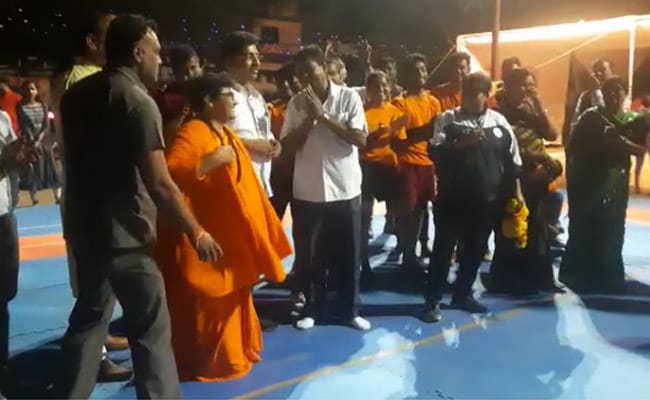 After worshiping Pragya Singh reached among the players playing in the ground of Shaktinagar and encouraged them by shaking hands with warmth. During this, he also played Kabaddi with female players on the request of the players.

yesterday garba today bhopal mp @SadhviPragya_MP Today mother came to see Kali, played Kabaddi with female players on the request of the players present in the ground there. pic.twitter.com/X1wWOg55aW

Earlier in July, he played basketball in Shaktinagar itself. MP Pragya Singh Thakur had reached the Basketball Ground in Shakti Nagar on July 2 to participate in the plantation program. Seeing the players practicing on the ground, Pragya Singh reached among them and started playing herself. Seeing Pragya Singh, who is often seen on a wheelchair, dribbling, then Congress spokesperson Narendra Saluja said that she had only seen in a wheelchair till now, but today it was a pleasure to see her trying her hand at basketball in the stadium.

BJP MP from Bhopal @SadhviPragya_MP Shakti came to the Basketball Ground in Nagar for plantation, seeing the players started playing herself. @ndtvindia@ndtvpic.twitter.com/R2iy7GBBM6

It is worth mentioning that MP Pragya Singh Thakur is suffering from high blood pressure. Apart from this, he reportedly has other diseases due to which he has trouble walking. This is the reason why she has been seen on a wheel chair for a long time. Pragya Singh was also infected with Corona in December last year, after which she was admitted to AIIMS in Delhi. Pragya Thakur, who was an accused in the 2008 Malegaon blasts, always remains in the headlines due to her statements.