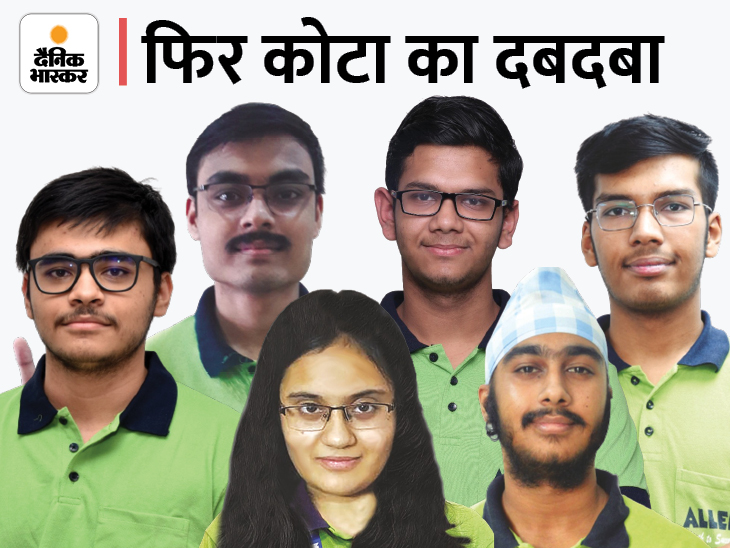 The All India Rank of JEE Main, the country’s biggest engineering entrance exam, has been released. In the combined results of all the four sessions of JEE Main, once again the dominance of quota has been shown. Out of 18 rankers who got top rank, 6 students are from Kota coaching. It consists of Anshul Verma, Siddhant Mukherjee, Mridul Goyal, Kavya Chopra, Pulkit Goyal and Guramrit Singh, who have scored 300 out of 300 in different JEE Main sessions.

Siddhant Mukherjee is fond of karate.

Got AIR-1 rank along with 11th, theory will give 12th exam this year
Siddhant Mukherjee has secured All India Rank 1 in JEE Main. Siddhant is originally from Mumbai. With the dream of becoming an IITian, ​​he had come to Kota in class 11 in 2019. Living with his maternal grandmother, he is busy preparing for the 12th board with JEE Advanced. Siddhant said that after doing B.Tech, he wants to contribute to Innovative India. Recently Siddhant has also got an offer to study from Cambridge University. Along with studies, he is also fond of karate. Siddhant has received Black Belt in this and Gold Medal in Queen’s Commonwealth Essay Competition. Siddhant has earlier scored 300 out of 300 along with 100 percentile in JEE Main February.

Study with a new target everyday – Mridul Aggarwal
Mridul Aggarwal has scored 100 percentile in March also after February JEE Main. Mridul scored 300 out of 300 in March JEE Main. Mridul studies with a daily target. In the morning, prepare what to study the next day. Self study is done for 6 to 8 hours daily. Mridul Aggarwal said- I have been studying in Kota for the last three years. Tried with 100 percentile, which was successful. Now the target of JEE Advanced is and I want to study computer science from IIT Mumbai.

Kavya Chopra has secured All India Rank 1 in JEE Mains.

Kavya is the first student with 300 marks out of 300
Kavya Chopra has secured All India Rank 1 in JEE Main. Prior to this, I have scored 300 out of 300 along with 100 percentile in JEE Main. Kavya wants to do B.Tech in Computer Science from IIT Mumbai. Kavya told- I had scored 99.97 percentile in February attempt, but my target was 100 percentile score. That’s why I gave JEE Main March Attempt. I focused more on chemistry in a span of 15 days. I have passed class 10th with 97.6 percent marks. Qualified NSEA in class 11th and RMO from class 9th.

Pulkit, who got All India 1 rank in JEE Main, hails from Bathinda in Punjab.

Pulkit, who scored All India 1st rank in JEE Main, hails from Bathinda, Punjab. Pulkit told- I have been preparing in Kota for the last two years. I do self study for 7 to 8 hours daily. Now full focus is on cracking JEE Advanced. Pulkit spends time with the family for recreation. I want to pursue engineering from CS branch from IIT Mumbai. Pulkit told that there is a great environment in Kota for studies, the teaching methodology here is the best, apart from this the faculties are very supportive. If there is any doubt, the faculty is ready to help.

Guramrit Singh told that he studies Physics for two hours in the morning. After this, chemistry for two to three hours during the day and maths at night.

Guramrit Singh, who scored 100 percentile in JEE Main February, said that he studies Physics for two hours in the morning. After this two to three hours of chemistry in the day and maths at night. Did not go to coaching at the time of lockdown, also worked in studying the time left in commuting. The lockdown benefited and the faculties were always in doubt. It was very beneficial to start online classes on time. He studies daily and plays cricket or football for two hours in the evening. Preparing for JEE-Advanced. Talk to parents for recreation.

Anshul plays chess with his father for recreation
Anshul Verma, a resident of Raipur, the capital of Chhattisgarh, has obtained JEE Main All India Rank 1. Along with this, I have scored 100 percentile by securing 300 marks out of 300 in the third session of JEE Main. Anshul studied in the classroom by staying in Kota instead of online. Anshul told that he studies 10 hours a day. Play cricket for recreation or play chess with Papa. Presently the focus is on JEE Advanced. Anshul wants to do BTech from CS branch of IIT Mumbai in future.