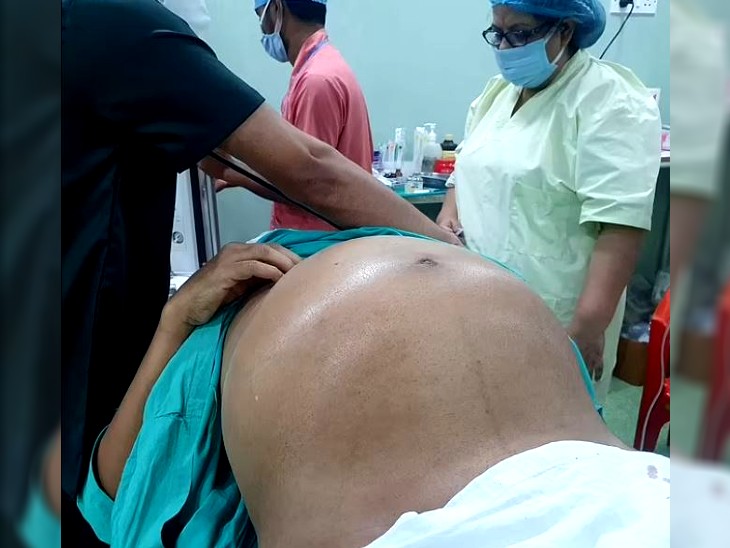 A 10-kg tumor has been surgically removed from the stomach of 45-year-old Arnab Mukherjee, a resident of Kolkata. Doctors say, before the surgery, the patient was troubled by severe abdominal pain, but after several rounds of tests, the tumor was detected. Retroperitoneal sarcoma cancer has been confirmed in the patient.

In August this year, Arnab went to the local doctor complaining of severe abdominal pain, but he could not detect the tumor. After some time, when the size of the stomach increased four times, the doctors were contacted, then the cancerous tumor was confirmed in the investigation. The patient was diagnosed with retroperitoneal sarcoma cancer.

4 hour surgery
Surgeon Dr. Makhanlal Saha from Victoria Medical Center in Kolkata, who performed the surgery, says, this is a very rare and serious case. The tumor could not be detected in the first test. It was detected after several rounds of testing as it was quite large in size.

This case was also dangerous because it kept increasing in size and could have adverse effects on other parts of the body. If it was not removed, the patient was in danger of death. The surgery, which took place on October 2, lasted about 4 hours. The special thing is that there was no damage to other parts of the body during the surgery.

That’s why surgery was challenging
Dr. Makhanlal says, the patient’s condition is now stable and is taking liquid food. After surgery, cancer is now being treated with chemotherapy and drugs to prevent recurrence of such tumors.

He says, the patient had a malignant tumor. It is a cancerous tumor that grows rapidly. There were many challenges in the patient’s surgery. As this tumor was developing in the retroperitoneum of the patient. This is the place where the main blood vessels of the body, kidney, pancreas and bladder are present.

What is retroperitoneal sarcoma cancer
Dr. Mukherjee says, the biggest effect of this cancer is on the stomach and the size of the stomach increases. However, in Arnab’s case, the stomach had grown too much. In such cases, apart from abdominal pain, the condition of hernia and anemia can also be formed.