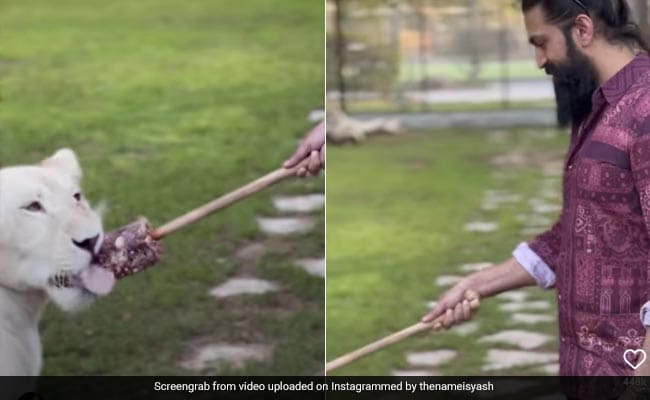 South’s superstar Yash has made everyone crazy with his style. People all over the world like them. At the same time, the fans are also eagerly waiting for his film ‘KGF Chapter 2’. Fans are very curious about the release of this film. For the time being, recently Yash has shared a video on his Instagram handle. Fans are appreciating him fiercely after watching this video. It can be seen in the video that Yash is seen feeding the lion.

He was seen feeding the white lion like this
Recently, in the video shared by Yash Video, it can be seen that he is seen wearing a printed red shirt. Along with this, he is also seen feeding the white lion standing nearby. His style is being liked by the fans very much. One user wrote while commenting – A lion with another lion, while another user wrote – what is the matter brother.

Fans are waiting for the film
Coming to KGF Chapter 2, the production house Hombale Films has collaborated with South based Zee channels for its release. Records have been sold to KGF Satellite Rights Zee Kannada, Zee Telugu, Zee Tamil and Malayalam. Starring Yash, Sanjay Dutt, Raveena Tandon, Srinidhi Shetty and Prakash Raj, the film is directed by Prashanth Neel.