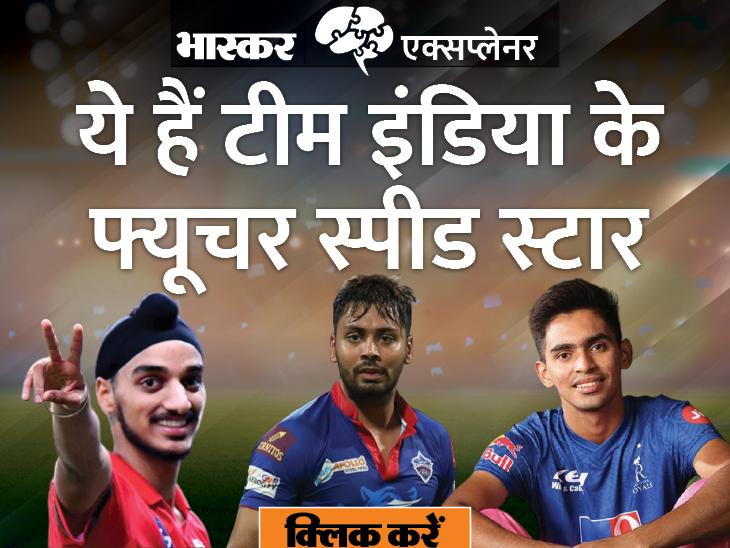 There was a time in Indian cricket when it was said that fast bowlers cannot be born in India. In the 1980s, Team India got the first true fast bowler in Kapil Dev. The 1990s were in the name of Javagal Srinath.

After that came bowlers like Zaheer Khan, Ashish Nehra, Ajit Agarkar and Irfan Pathan. Then it seemed that the saying about fast bowlers in India is going wrong. And so it happened. In the current era, India has the best pace attack in the world, but today we will talk about the future of India’s fast bowling.

The match between Rajasthan Royals (RR) and Punjab Kings (PBKS) was held on Tuesday in the name of two young fast bowlers of the country, Arshdeep Singh and Karthik Tyagi. Arshdeep took the first 5 wickets to prevent RR from crossing 200 runs, then Karthik did not allow PBKS to score 4 runs in the last over of the match.

Along with these two, there are many such young fast bowlers in the IPL, seeing their performance, it can be claimed that the future of Indian fast bowling is in the right hands. In the coming time, many great fast bowlers will be seen in Team India. Let’s take a look at the performance of 8 such faces so far….

1. Kartik Tyagi: Karthik, 20, came into the limelight for the first time during the 2020 Under-19 World Cup. India was the runner-up in this World Cup. Karthik took 11 wickets in six matches at an economy of 3.45. Due to this performance, Karthik was bought by RR for Rs 1.30 crore in the 2020 IPL auction. He bowls at a speed of 148 km/h. He has taken 12 wickets in 12 matches of IPL. In the last match, Karthik showed that although he is young, he can perform better under pressure.

2. Arshdeep Singh: Arshdeep has been associated with Punjab for the last three seasons. Like Karthik and Kamlesh, Arshdeep was also rewarded for his performance in Under-19 cricket. Arshdeep, who is 6 feet 3 inches tall, also has the advantage of his height. Arshdeep got a chance to play 3 matches in the 2019 IPL. He took 3 wickets in these three matches. In the IPL of 2020, he played 8 matches and took 9 wickets. In this season he has taken 12 wickets in 7 matches. Which is more than senior teammate Mohammed Shami.

3. Chetan Sakarya: Chetan Sakariya is also among the young fast bowlers who are being talked about the most in this IPL. He has got the reward for his performance in the first leg of the IPL by playing for Team India in the Sri Lanka tour. This bowler from Saurashtra has been bought by Rajasthan Royals for 1.2 crores in this season due to his performance in domestic cricket. Sakariya has been a part of all 8 matches of Rajasthan this season. During this 23-year-old fast bowler has taken 8 wickets.

4. Avesh Khan: This fast bowler from Madhya Pradesh was included in the reserve players of Team India on the tour of England. Avesh made his first-class debut in 2014 at the age of just 18. Selected in Team India for 2016 Under-19 World Cup. In 2017 Avesh joined RCB and made his IPL debut. He joined Delhi in the next season. He has been a part of Delhi Capitals for the last four seasons. In the list of highest wicket-takers in the current season, 24-year-old Avesh is at number two with 14 wickets. Avesh is also known for his speed.

5. Famous Krishna: The famous Krishna came into the limelight after making his debut in the 2018 IPL. In his very first season, he grabbed everyone’s attention by taking 10 wickets in 7 matches. However, his performance in the next season was not so good. In 2019, he played 11 matches and was able to take only 4 wickets. He got 5 wickets in 6 matches played in 2020. He has taken nine wickets in the current season. Due to his speed and wicket-taking ability, earlier this year, he got an opportunity to make his ODI debut for Team India. In his debut match itself, this player from Karnataka showed that he is going to play for Team India for a long time.

6. Kamlesh Nagarkoti: Nagarkoti’s age is only 21 years. Like Karthik, Nagarkoti also came into the limelight from the Under-19 World Cup itself. Nagarkoti was part of the team that became the champion under the captaincy of Prithvi Shaw in 2018. Nagarkoti bowled even faster at 145 km/h in the World Cup.

Hailing from a small town like Barmer in Rajasthan, Nagarkoti was bought by Kolkata Knight Riders in 2018 for 3.2 crores, but he did not play in the 2018 IPL due to injury. Despite this, KKR retained him. Even before the 2019 season, he was ruled out of the tournament due to a back injury. KKR wicket-keeper Dinesh Karthik believes that the level of fielding of Nagerkoti is similar to Ravindra Jadeja.

For the first time in 2020, he got a chance to play in the IPL. He took 5 wickets in 10 matches. So far this season he has got a chance to play only one match. Injury-ravaged Nagarkoti is yet to have a memorable performance in the senior circuit, but his pace and fielding make him a future star.

7. Ishan Porel: Along with Kamlesh Nagarkoti, Shivam Mavi, Ishan Porel was also part of the team that won the 2018 Under-19 World Cup. However, like Mavi and Nagarkoti, he did not get a chance in the IPL immediately after the World Cup. Due to his consistent performance in domestic cricket for the last four years, this year Punjab Kings bought him at a base price of 20 lakhs. Porel is also known for not giving runs as well as taking wickets. His economy in T20 is just 6.64. He took 1 wicket in his debut IPL match on Tuesday. However, he proved to be a bit expensive in this high scoring match.

8. Shivam Mavi: Shivam Mavi from Uttar Pradesh was part of the 2018 Under-19 World Cup squad. The pair of Shivam and Kamlesh Nagarkoti made a big splash in that World Cup. Along with Kamlesh, Shivam was also bought by KKR after the World Cup. Shivam, who started his career as a batsman, took 5 wickets in 9 matches in the 2018 IPL. In 2019, he did not get a chance to play a single match, but in 2020, Mavi took 9 wickets in 8 matches. So far this season, Mavi has got a chance to play only 3 matches. He has got 2 wickets in these three matches.