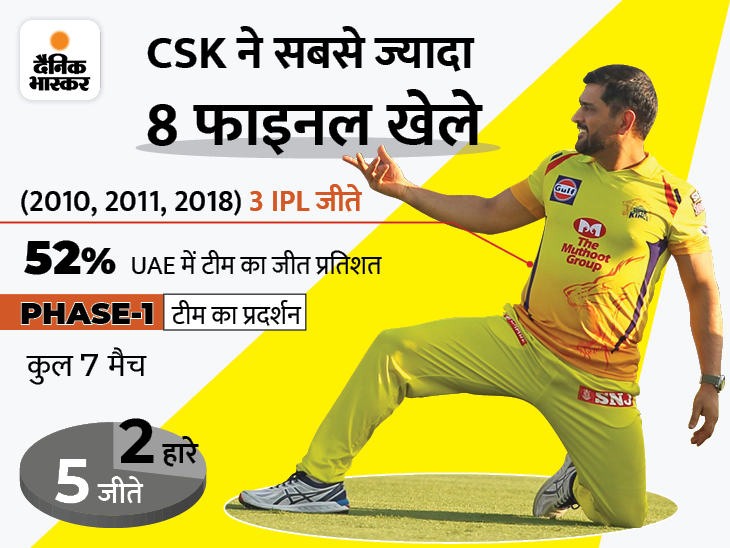 Chennai Super Kings (CSK) had a disappointing performance during the IPL-13 played in the UAE last year. Dhoni’s team, which played the most 8 finals in IPL history, failed to make it to the play-offs for the first time. The major reason behind the team’s poor performance in IPL-13 was Suresh Raina’s absence from the team. However, this year the team rectified their mistakes and showed a strong game to finish second in the points table with 10 points.

This time Raina is also in the team and looking at the current performance, luck is also seen with the team. In the last season, the team had a very poor start, but by the end of the tournament, the team showed a good game and won 3 matches in a row. Dhoni and Co have played 19 matches on UAE grounds, winning 10 and losing 9. In Phase-2, CSK will take the field to win the title for the fourth time.

In Phase-2, Chennai has a world class batsman and the world’s top all-rounder. Also, Dhoni’s experience can be very useful for the team, but the team does not have specialist bowlers for the death overs, which can be a big problem. Let us do a SWOT analysis of CSK’s team for the 2021 season along with some such important points. That is, analysis of the team’s Strength, Weakness, Opportunity and Threat.

Strength – 1 Strong batting and powerful finisher
CSK’s batting order is very strong. The team has names like Rituraj Gaikwad, Robin Uthappa, Faf du Plessis and Ambati Rayudu in the top order. These four players present their claim in the opening. However, Gaikwad and du Plessis did a good job for the team before the tournament was suspended.
After this, Mr. IPL Suresh Raina, Captain Mahendra Singh Dhoni and Moeen Ali are present to strengthen the middle order. Sam Curran, Dwayne Bravo, Ravindra Jadeja and Shardul Thakur can play the role of finishers for the team.

CSK have one such all-rounder in Sam Curran, who has the power to win matches in any condition. On the tour of England, Shardul Thakur also turned the dice of the Oval Test with his batting.

Strength 2 spin bowling
The spin department of the three-time champions CSK is quite good. The team has bowlers like Ravindra Jadeja, Moeen Ali, Karan Sharma, Imran Tahir, Krishnappa Gautam, Mitchell Santner and Sai Kishore. It is no secret that spinners get more help on UAE grounds, so Dhoni has no shortage in this department.

In Phase-2, Chennai has to play 3 matches in Dubai and 2-2 matches in Sharjah and Abu Dhabi. The ground in Sharjah is quite small and the pitch there has always been a batsman’s paradise. Along with the fast bowlers, spinners are also very effective in Dubai. The Dubai wicket sometimes behaves like the Chepauk Stadium in Chennai, which is a good thing for Dhoni’s team and the Abu Dhabi wicket is considered a spin bowler’s paradise.

Weakness: Lack of experience in bowling
CSK have a very balanced team to say, but the lack of experience in the team’s bowling department is clearly visible. The team definitely has bowlers like Dwayne Bravo, Deepak Chahar, Shardul Thakur, Lungi Ngidi and Josh Hazlewood, but except Bravo and Hazlewood, Chahar, Ngidi and Thakur do not have much experience in fast bowling. Also, not having a specialist death bowler with the team can be considered a big weakness.

Bravo would have played the responsibility of the first death bowler for the team, but due to his growing age, he no longer seems to have the strength in his bowling and his recent form has also not been good. At the same time, Hazlewood has also not played a single T20 match at the international level.