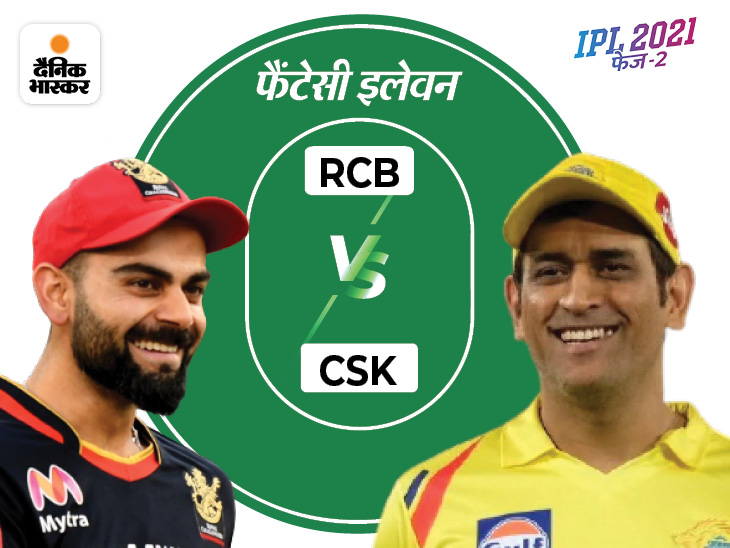 IPL 2021 will see a tough competition between Royal Challengers Bangalore (RCB) and Chennai Super Kings (CSK) today. CSK will take the field with the win in the last match. At the same time, RCB’s eyes will be on the first win in Phase 2. This match between the teams of Kohli and Dhoni will be played at Sharjah Cricket Stadium.

Fours and sixes will rain in Sharjah
This match will be played in Sharjah and the wicket of this ground is considered to be a batsman’s paradise. The ground of Sharjah is quite small and it is guaranteed that there will be a lot of rain of fours and sixes. Most of the matches have seen a score of 200+ and due to the small field, teams prefer to play fast bowlers instead of spinners, because they get bounce here.

It will be beneficial to keep the batters in the Fantasy-11 due to the pitch being the desired pitch for the batsmen. These include RCB captain Virat Kohli and Glenn Maxwell. At the same time, the names of Rituraj Gaikwad and Faf du Plessis are included from CSK.

batsman
Captain Kohli, Glenn Maxwell, Rituraj Gaikwad and Faf du Plessis can be bet on as a batsman for Fantasy-11. Kohli may not have scored a century in two years, but his experience and taking the pressure off him due to leaving the captaincy could be a win-win deal for RCB. At the same time, Maxwell has been the most successful batsman of RCB this season. Due to the small ground in Sharjah, Maxi can see a big innings with the bat.

CSK’s openers are also in tremendous form. Du Plessis was dismissed for zero in the last match, but he has scored two half-centuries in four matches at Sharjah. Du Plessis had scored a lot in the CPL as well. Talking about Gaikwad, he has scored four consecutive half-centuries in UAE and his bat is not taking the name of stopping. In such a situation, these four batsmen can get you points.

all-rounders
Moeen Ali, Sam Karan and Wanindu Hasaranga can be bet on as all-rounders. These three players have the ability to change the course of the match with the ball and the bat. In this season, Moeen Ali has taken 5 wickets with 206 runs. This will be Karan’s first match in Phase-2 and he was seen in a very good rhythm in the Test series against India. Sam Curran’s strike rate in IPL 14 has been 208 and 9 wickets have also come in his account.

In the last match, Wanindu Hasaranga got a chance to make his IPL debut. Although he has not been able to do anything for a particular team, Hasaranga’s recent performance has also been very impressive and he can get you points.

bowlers
Mohammad Siraj, Harshal Patel and Shardul Thakur can be included in this department. In IPL 2021, Siraj has taken 6 wickets so far and Harshal, who took 17 wickets, has a purple cap on his head. At the same time, Thakur can work to give success to CSK in the opening overs. He also got 1 wicket against Mumbai.

Prediction was correct in last match
In the match played between Delhi and Hyderabad, our prediction was correct. In the batsmen, we picked Shikhar Dhawan and Rishabh Pant and both played well. Prithvi Shaw was also seen in a very good rhythm in the beginning. On the other hand, Rashid Khan managed to take 21 wickets with the bat and 1 wicket with the ball. In Fantasy-11, Dhawan had 587 points, Prithvi Shaw had 459 points and Rashid had 386 points in his account.