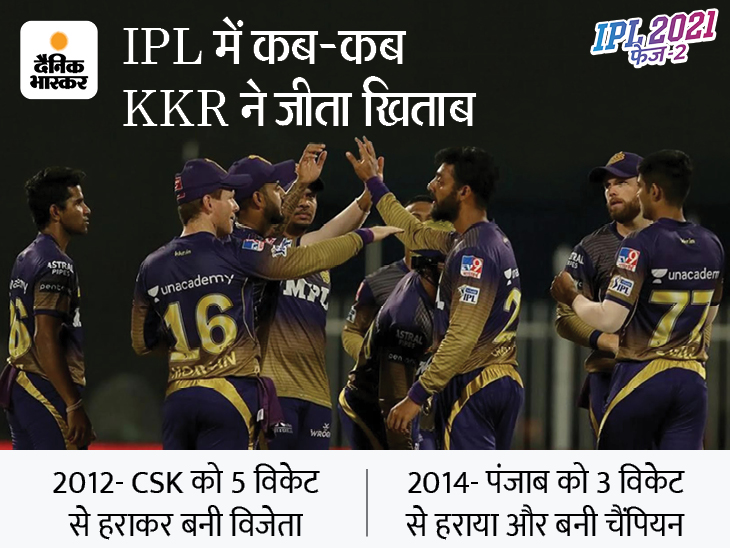 IPL 2021 final is to be played between Chennai and Kolkata today. Kolkata Knight Riders (KKR) have reached the final for the third time. Earlier in the year 2014 and 2012 also this team has reached the finals. Both the times Kolkata’s team became the champion. During this, the captain of the team was former India opener Gautam Gambhir.

Chennai Super Kings were defeated in 2012
In the final match of IPL 2012, Chennai captain Mahendra Singh Dhoni won the toss and decided to bat first. Suresh Raina played a brilliant innings in the match. He scored 73 runs in just 38 balls. At the same time, Mike Hussey scored 54 runs in 43 balls with the help of 4 fours and 2 sixes. On the basis of Raina and Hussey, Chennai scored 190 runs for the loss of 3 wickets in 20 overs.

Manwinder Bisla’s blast and Kolkata became champion for the first time
theKolkata opener Manwinder Bisla appeared in a different color in the match. He played a match winning innings of 89 runs in just 48 balls. He also received the Man of the Match award for this innings. However, after the dismissal of Manvinder Bisla, the Kolkata team was in a bit of trouble. Yusuf Pathan got out early and then the team needed 26 runs in 17 balls to win. Then the team got another setback.

Jacques Kallis was dismissed for 69 off 49 balls. Kolkata had to score 8 runs in the last over. Dhoni gave the ball in the hands of Dwayne Bravo, but he could not save the match. In the year 2012, Dhoni, Suresh Raina, Ravindra Jadeja, Dwayne Bravo were with the team. He will also be with the team in the final to be held today. At the same time, that final match was played by Shakib Al Hasan and Sunil Narine for the Kolkata team. After 9 years, these players will also be part of the KKR team.

Kolkata reached the finals again after two years
After 2012, Kolkata Knight Riders won the title again in IPL 2014. This season also the captain of the team was Gautam Gambhir. Kolkata Knight Riders defeated Punjab by 3 wickets in the final of 2014. Wriddhiman Saha played a brilliant innings for Kings XI Punjab in the match. He scored his first century in the IPL final. Punjab team scored 199 runs for the loss of 4 wickets in 20 overs. Saha played an unbeaten innings of 115 runs off 55 balls. At the same time, the team’s opener Manan Vohra scored 67 runs in 52 balls.

Manish Pandey’s explosive innings and Kolkata became the winner for the second time
Chasing the target, the Kolkata team got initial setbacks, but after that Manish Pandey and Yusuf Pathan took over the team. Both added 71 runs for the third wicket. Manish Pandey scored 94 runs in 50 balls with the help of 7 fours and 6 sixes. At the same time, Yusuf Pathan played a quick innings of 36 runs in 22 balls. During this innings, he hit 4 sixes. Kolkata achieved the target of 200 runs in 19.3 overs for the loss of 7 wickets. Manish Pandey was adjudged man of the match.