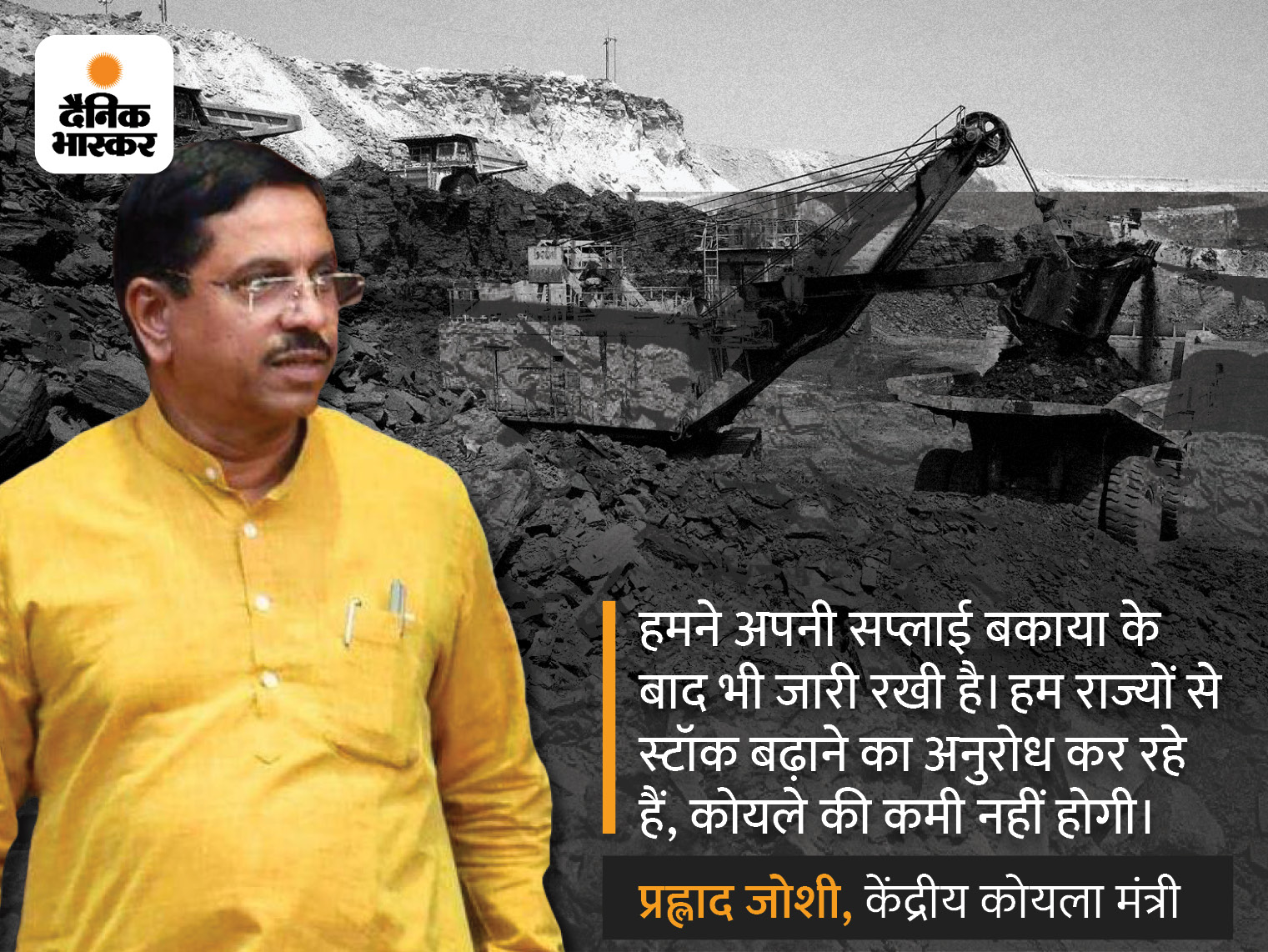 India is facing coal shortage. Most coal-fired power plants have only a few days’ stock left. Data from the Central Electricity Authority of India shows that in the previous years also, there was a shortage of coal in the months of September-October. Even then the reserve stock of coal was left for only a few days. However, this reduction did not have much impact on power generation. This time also it has been assured by the government that there is a stock of coal with the power plant.

The government said that the available stock at the Thermal Power Plant (TPP) as on October 11 was 7.3 million tonnes (MT), which is enough for four days. Against the demand of 1.94 MT in the next 4-5 days, 1.5 MT to 2 MT of coal will reach the power stations. Finance Minister Nirmala Sitharaman said that the reports of coal shortage in the country are completely baseless. India is a power surplus country.

Earlier, Union Coal Minister Prahlad Joshi had said, ‘We have continued our supply even after dues. We are requesting the states to increase the stock… there will be no shortage of coal.’ “There has been a shortage of coal due to rain, which has pushed up international prices from Rs 60 a tonne to Rs 190 a tonne,” he said. The pressure on its domestic coal has increased.

In such a situation, we are going to tell you that when there was a shortage of coal in the country earlier. What is the status of coal production in the country and the world? How much and what quality of coal does India import:

demand for coal
The two main uses of coal are power generation and steel making. China’s impressive economic growth over the past 20 years and the expansion of electrification in India was largely based on coal. In 2020, coal produced 63% of electricity in China and 72% in India. Talking about the demand of coal at present, the delivery of coal in the power plants of India is decreasing from 60,000 to 80,000 tonnes per day. Coal production in India has increased from 282 MT in the same period last year to 315 MT in the six-month period of April to September 2021, showing an increase of around 12 per cent. Despite this, the demand for coal in India is not being met.

Global demand to decline by 4% in 2020
According to the IEA, global demand for coal fell by 4% in 2020. This was the biggest drop since the Second World War. The main reason for the decline was the lockdown imposed due to Kovid-19 which reduced the demand for electricity. However, China was the only country where the demand for coal increased in 2020. The IEA also said that in 2021, we expect global coal demand to increase by 4.5% compared to 2020, with economic activity expected to improve.

coal import in india
India is the second largest coal importer in the world. India imports coal from countries like Indonesia, Australia, South Africa and America. During 2020-21, the total import of coal and coke into India was 215.92 MT. This was about 12.6% lower as compared to FY20. In FY20, 247.10 MT of coal was imported. At the same time, data from commodity consultant Kepler shows that India’s coal imports have decreased since June.

In the week beginning October 4, Kepler estimated India’s thermal coal imports at 2.67 million tonnes. This is more than the lowest week of the year. This year’s lowest week was the week that started from September 13, in which imports were only 1.46 MT. Talking about the strongest week of this year in coal imports, it was the week that started from May 3, in which imports were 3.83 million.

The countries of both China and India are not increasing their coal imports, the main reason for this is the global energy crunch, due to which the prices of coal have reached record high. China’s Economic Planning Agency said that the country will gradually increase the import of coal.

quality of coal
Coal is mainly composed of carbon. It is formed over millions of years by geological pressure on plant residues buried under the soil. The heat value (measured in gross calorific value) of coal reserves in our country is less than that of international coal reserves. According to the United States Geological Survey, there are mainly four types of coal. Anthracite, bituminous, subbituminous and lignite. Most of the bituminous and subbituminous coal is imported for the generation of electricity in the power plant. India also imports this coal for power generation.

1. Anthracite:
It is the highest grade of coal with a high percentage of fixed carbon. It is hard, brittle, black and shiny. It has a carbon content of more than 80%. It is found in small quantities in the regions of Jammu and Kashmir.

2. Bituminous:
It is a medium grade coal with high heating capacity. It is the most widely used coal for electricity generation in India. Most of the bituminous coal is found in Jharkhand, Odisha, West Bengal, Chhattisgarh and Madhya Pradesh.

3. Subbituminous
It is black in color but not shiny. Subbituminous coal has a low-to-moderate heating value. It is also used in electricity generation.

4. Lignite:
This is the lowest grade coal. It has the lowest carbon content. It is found in the regions of Rajasthan, Tamil Nadu and Jammu and Kashmir.

The country also saw a shortage of coal earlier
Data from the Central Electricity Authority of India shows that in previous years too, the months of September-October saw a coal shortage. Even then the reserve stock of coal was left for only a few days. According to experts, one of the reasons for the disruption in the supply of coal is heavy rains in the mine areas. Here let us also tell you that the reserve stock is used when the regular supply of coal is interrupted.