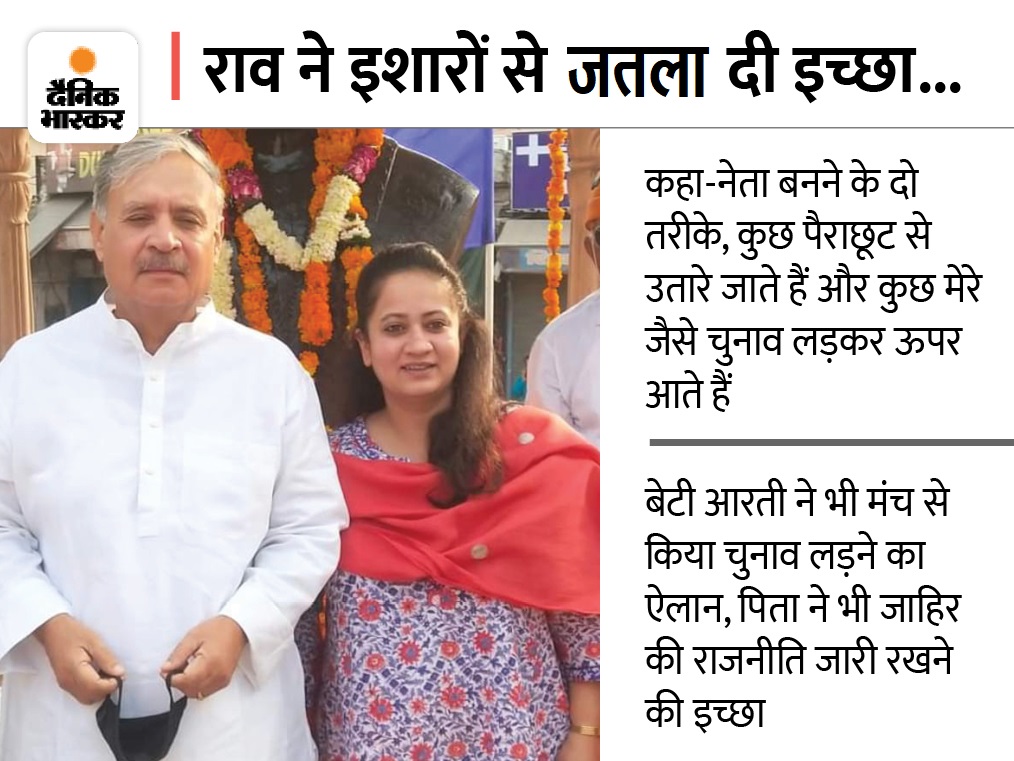 Union Minister Rao Inderjit Singh, during his address at the Martyrdom Day rally in Jhajjar, Haryana, pointed to many political equations. While mobilizing the crowd, he talked about coming out of Ahirwal and fighting the battle, while also conveyed the message to the high command through OP Dhankhar present in the pandal. At the same time indirectly he also expressed his desire to lead Haryana. Rao answered the question of opponents of getting old and said that he is still healthy and will not leave politics so soon. Still he is expected to get the leadership.

Rao did not say anything directly but questioned the state leadership by referring to the removal of the leader from parachute. Rao mentioned that there are two ways to become a leader, one comes from below by contesting elections and the other is brought down by parachute. Rao said that he was proud that he rose from the grassroots level and came forward fighting the elections. Rao mentioned from the stage that he had become a minister for the first time in the Bhajanlal government. If I went to the villages, very few people knew. When the villagers asked, they told that I am the son of Rao Birendra Singh.

After this the voice of the villagers was that it is his son, by whose name the slogan is taken till today, “Rao aaya-bhav aaya”. Rao said that even if you become the Chief Minister for a few days, but listen to the people and do their work. During the speech, Rao also talked about the battle of Naseebpur. He told the public that he fought the battle of Naseebpur i.e. Ahirwal, now Panipat. He also tried to give a direct indication that now he does not want to remain confined to Ahirwal.

Rao Inderjit’s address is being discussed loudly in the political circles. Pointing to the party’s state president Omprakash Dhankhar, who was present on the stage, he mentioned that the people of the Sangh are sitting in the pandal, so everything about them will reach the high command as well. Referring to the loss of the Rewari seat in the 2019 elections, he questioned the party itself and said that there is some Jaichand among the party. At the same time, instead of ignoring those people, after the formation of the government, he questioned the leadership, saying that the reward would be given.

People gathered to listen to Rao Inderjit Singh in the rally.

try to connect directly with the public

Rao also took a dig at the monarchy during the rally. He mentioned from the stage that some people call him from the royal family, but the monarchy was snatched by the British. If someone calls him a king, it is because he has love for our family in his heart. He talked about his 40 years of politics with the politics of his father, former CM Rao Birender Singh. Also said that if after winning he does not go among the public, then how would the public choose him 5 times MP and 4 times MLA.

Father-daughter pointing to other options

In the Patauda rally, Rao Inderjit Singh’s daughter and BJP state executive member Aarti Rao also announced to contest from the stage. At the same time, Rao Inderjit Singh himself also expressed his intention not to retire from politics. Both tried to signal to the high command that this time they were in a mood to challenge instead of succumbing to the pressure. In the 2019 assembly elections, Aarti Rao’s ticket was cut by the party saying that she did not promote familyism. At the same time, the aged leaders in the BJP are gradually sent to the Guidance Board. In such a situation, Aarti Rao’s announcement to contest the election and 70-year-old Rao to continue politics is indicating that if the BJP high command does not listen, then another option will be considered.