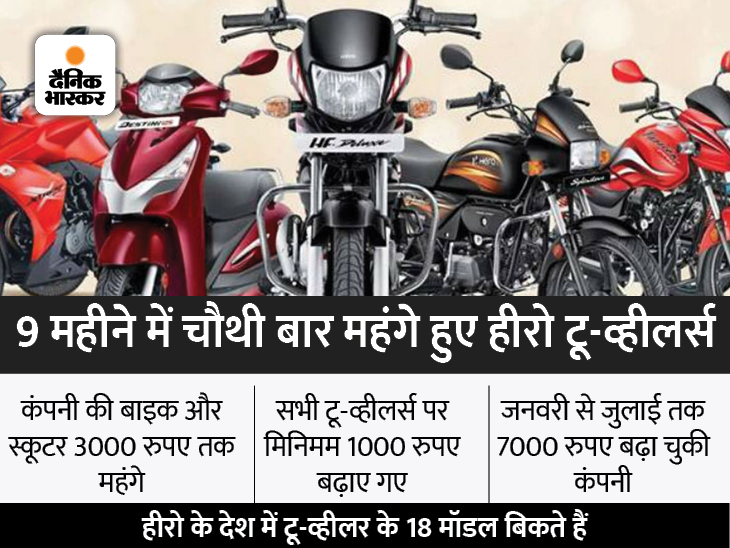 Hero MotoCorp has increased the minimum ex-showroom price of all two-wheeler models by Rs 1000 and maximum by Rs 3000. The new prices have come into effect from today. That is, now the budget will have to be increased to buy Hero’s bikes and scooters. The main reason behind the increase in prices is the cost of raw material. This includes steel, aluminum, plastic and metal.

Price hiked 4 times in 9 months
Hero MotoCorp has increased the prices four times during the last 9 months from January 2021 to September 2021. Earlier in July also, the company had made its vehicles expensive by up to Rs 3000. At the same time, twice it was increased to 1500 rupees and 2500 rupees.

Cheap two-wheelers become more expensive
The company has not yet released the list of new prices increased on two-wheelers. There are a total of 18 models of Hero in the Indian market. In which 13 bikes and 5 scooters are included. In such a situation, all these have been increased up to Rs 3000. However, it is not yet decided on which model will increase the price of Rs 3000 and which model will have the lowest price. According to auto experts, the company’s cheap models can be the most expensive. At the same time, the price of the top model will increase less.

Hero’s 18 two-wheelers become expensive
Hero MotoCorp sells 18 models of two-wheelers in the country. This includes 13 bikes and 5 scooters. Hero’s cheapest bike is HF 100 with a starting price of Rs 49,800 ex-showroom. At the same time, the most expensive bike is the Xtreme 200S, whose starting price is Rs 1,24,014. Similarly, the company’s cheapest scooter is the Pleasure Plus, with a starting price of Rs 60,500. At the same time, the New Maestro Edge 125 is the most expensive scooter, starting at Rs 72,250. However, from today their price has increased by up to Rs 3000.

The special thing is that Hero gets a challenge from Honda. If we talk about the financial year 2021, then Hero’s market share was 35.81%. At the same time, Honda’s market share stood at 25.72%. The market share of other companies like TVS Motor and Bajaj is not even equal to half of Hero.