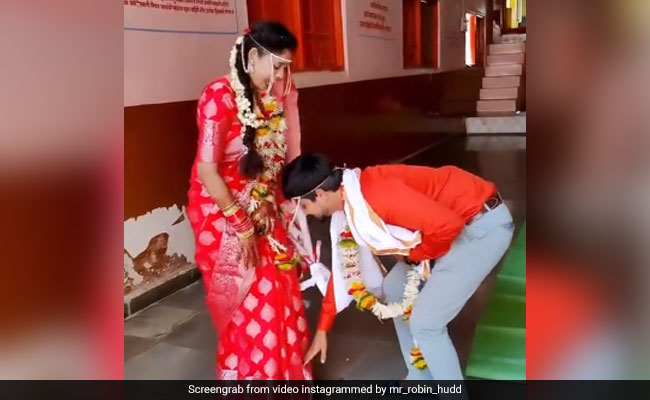 The groom took the bride’s blessings after the wedding, bowed down and touched the bride’s feet

Wedding videos are becoming quite viral on social media. In every video we get to see some new ritual or some new joke. But, the wedding video which is now going viral on social media has won the hearts of the people. In this video, after marriage, it is seen taking the blessings of the bride and groom. People are praising this groom fiercely and people are also liking this video very much. Have you ever seen a groom taking the bride’s blessings? If you haven’t seen it, take a look now.

This video has been shared on Instagram from a page named mr_robin_hudd. In this video going viral, you can see that the bride and groom are standing in the temple and both are wearing garlands. First the bride bows down and takes blessings by touching the groom’s feet. After that the groom also bows down and starts touching the bride’s feet, but then the bride jumps back with a smile. Both are looking very happy in the video.

People are very much liking this video. People say that the groom has won our hearts. This video has been viewed more than 35 million times on social media so far. People are making many comments on the video, as well as praising the groom fiercely.