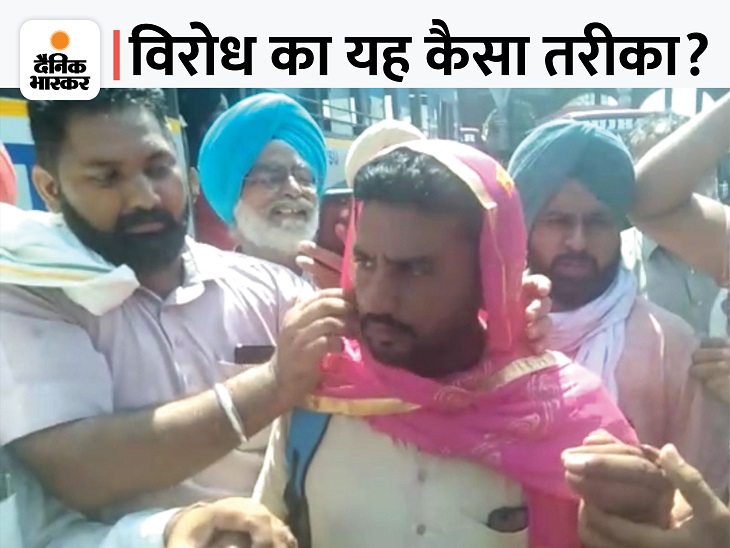 Striking workers wearing bangles and chunni on their heads to the conductor at Moga bus stand.

Government buses strike in Punjab continues for 9th day. Meanwhile, in Moga, the anger of the striking workers broke out on a conductor. This conductor belongs to Faridkot depot of PRTC. Who was doing duty instead of joining the strike. When he reached Moga bus stand with the bus, the striking employees surrounded him. The union called him a traitor and put bangles in his hand and chunni on his head. After this, slogans of ‘Gaddar Log-Murdabad’ were also raised. Questions are also being raised on this method of protesting against this.

The employees say that the conductor is on contract. No employee of Punjab Roadways, PUNBUS and PRTC is working in entire Punjab. Despite this, this conductor has rebelled by breaking away from the union. Union is fighting for all. In such a situation, everyone should give their support. If the demands are accepted, it will benefit all the employees working on the contract.

Striking workers forcibly wearing bangles in the hands of the conductor.

Strike likely to open after meeting with Captain

Amidst the strike of the employees, on Tuesday, ie today, the striking employees will have a meeting with the Chief Minister Captain Amarinder Singh. The strike may open today after the final decision in this. However, what is the stand of the Captain regarding the demands of the employees, it is awaited. Especially, due to the closure of the free bus travel scheme for women near the elections, the government is also said to be angry with the employees’ strike.

If things don’t work out, then the highway will jam, the government can leave

This will be the last interaction of the employees with the government with the Captain. If a firm decision is not taken in this, then the union of contract employees can jam the highway. Traffic jam during the festival season can increase the difficulties of the people. At the same time, there is already a situation of conflict between the government and the employees. The government has already completed the paperwork by sending them notices asking them to return to work. In such a situation, if the strike does not open from Tuesday, the government can leave the striking employees. However, the union has said that it is not afraid of any such action.

In Punjab, 8000 employees of PUNBUS, Punjab Roadways and PRTC are going on strike. Due to which about 2 thousand government buses are standing in 29 depots of Punjab. The employees have also gheraoed the Captain at Siswan Farm House. Earlier, he had a meeting with Chief Principal Secretary to the Chief Minister Suresh Kumar. However, only after ending the strike there, the condition of meeting the Captain worsened the situation. After this, he got an invitation to meet the CM after gheraoing the Siswan farm house.