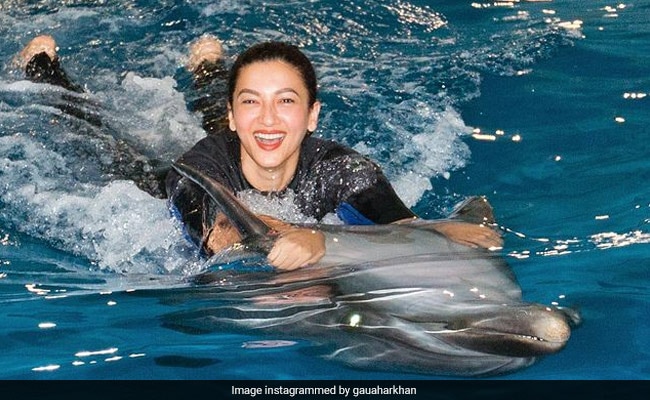 Gauahar Khan, who is included in the glamor girls of Bollywood, is also a sensation of social media. As soon as Gauahar Khan shares any of her photos or videos on Instagram, it becomes viral in a few minutes. Some such photographs of Gauahar are becoming very viral on social media these days. In these photographs, Gauahar is not only seen flirting with someone in the water, but she is also kissing him. At present, this style of Gauhar is winning the hearts of the fans.

These pictures are of the famous Dolphinarium of Dubai

Gauahar Khan himself has shared these pictures from his official Insta account. Actually, Gauahar is enjoying her vacation in Dubai these days. It can be seen in the pictures that the one with whom Gauahar is having fun in the water and whom she is kissing is none other than a dolphin. In these pictures, Gauhar is sometimes clinging to the dolphin as if she is riding it, then in the second picture she is seen lovingly kissing the dolphin. These pictures are from the famous Dolphinarium of Dubai.

Gauhar is very happy to have fun with Dolphin

Gauahar has also written a cute caption with these pictures. Gauahar wrote that- Love and respect for all beings in the world! I whispered to #Bella several times that I love her! Wow Masha Allah dolphins are very intelligent. Nice to be here at @dolphinariumdubai. It is like a once in a lifetime experience. Obviously, Gauahar is very happy to visit the dolphinarium and have fun with the dolphins and her fans are also very happy to see these pictures of her favorite star. Perhaps that is why the shower of likes and comments started on this post of Gauahar. Fans are expressing their happiness through heart emoji and smiley. One user wrote who does such a ride. Whereas another user wrote a very beautiful picture

Although some people did not like these pictures. These people have written in the comment box that this is not right. Animals are not entertainment or a means of earning money. This place is not their natural home. Being a public figure you should show responsibility and not encourage it.