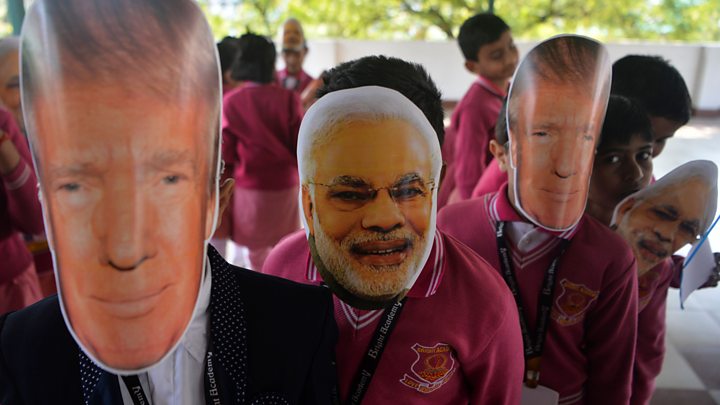 US President Donald Trump has addressed a massive public rally with Indian Prime Minister Narendra Modi on his first official visit to the country.

“Namaste,” he began to a thunderous round of applause, before going on to refer to several Indian icons, from history to cricket to Bollywood.

He was speaking at the Motera stadium in Gujarat, Mr Modi’s home state.

“India will always hold a very special place in our hearts,” he said.

He also had words of praise for Mr Modi: “Everybody loves him but I will tell you this, he is very tough. You are not just the pride of Gujarat, you are living proof that with hard work, Indians can accomplish anything they want.”

However, he struggled to pronounce several Indian words – from Ahmedabad, the city where he was speaking, to Swami Vivekananda, an Indian philosopher, greatly admired by Mr Modi. He also called the Vedas – ancient Hindu texts – “Vestas”.

He ended his speech by saying, “God bless India, God bless the United States of America – we love you, we love you very much.” He spoke after Mr Modi, and the BBC’s Rajini Vaidyanathan says crowds began leaving mid-way through the US president’s speech.

Mr Trump’s visit comes at an opportune time for Mr Modi, who has been under the spotlight in recent months following controversial decisions by his government.

In December, India passed a contentious new citizenship law granting amnesty to non-Muslim immigrants from certain countries. This prompted massive protests across the country, with critics accusing the government of marginalising India’s more than 200 million Muslims – a charge the government denies.

But protests are still continuing, and clashes are being reported in parts of Delhi on Monday, hours ahead of Mr Trump’s visit. Groups protesting against the citizenship law, and those in favour of it are believed to have pelted stones at each other.

Police told local media that the situation is under control now, although some reports say paramilitary forces have been called in to quell the unrest.

Mr Modi’s government is also still struggling to restore normalcy in Indian-administered Kashmir. In August, the region was put under a communications blockade after its partial autonomy was revoked, sparking protests in the Muslim-majority valley. Mobile phone connections and the internet have only been partially restored, and state leaders and hundreds of others are still under house arrest.

The two decisions have sharply polarised India, and have been questioned by leaders abroad.

But Mr Modi put on a grand public reception to welcome Mr Trump who arrived in Gujarat earlier on Monday. He was greeted with a road show as crowds lined his route to the stadium. It featured performers from across the country, showcasing the arts from different Indian states.

Billboards along the route to the Motera stadium were emblazoned with pictures of the men and carried slogans such as “two dynamic personalities, one momentous occasion”.

Mr Trump entered to the music of Elton John, which he is known to love, playing on the speakers.

The event is being compared to the “Howdy, Modi!” event that Mr Trump and Mr Modi held in Houston last year, which was attended by 50,000 people.

Mr Trump had earlier made a quick stop at the Sabarmati Ashram, where Indian independence leader Mahatma Gandhi, who was born in Gujarat, lived for 13 years.

He and First Lady Melania Trump tried their hand at the charka or spinning wheel, which is used to spin cloth. Gandhi popularised the act as a form of protest against foreign-made cloth during India’s independence movement.

But amid the fanfare, a much-talked about trade deal is unlikely to happen during the trip.

The US is one of India’s most important trade partners, with bilateral trade totalling $142.6bn (£110.3bn) in 2018. The US had a $25.2bn goods and services trade deficit with India, its ninth largest trading partner in goods.

Despite growing political and strategic ties, there’s been tension over trade issues. Mr Trump has said India’s tariffs – taxes on imports – are “unacceptable”, and has described India as the “king” of tariffs.