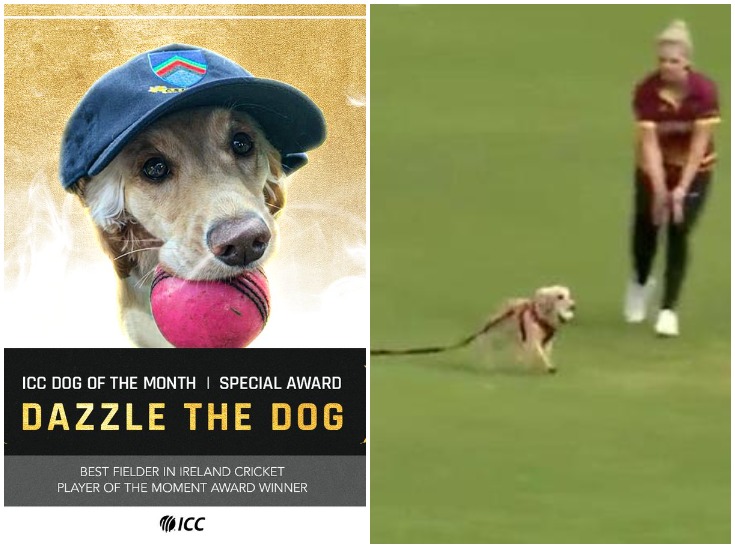 The ICC announced its ‘Player of the Month’ awards on the previous day. This time in the men’s category, England’s in-form Test captain Joe Root got the title, while in the women’s category, Ireland’s Emir Richardson won this award.

dog got special award
A dog managed to grab the most limelight during the Player of the Month Awards. Actually, the ICC also awarded the award to a small pet dog. ICC shared the dog’s photo and captioned it as ‘ICC Dog of the Month Special Award.’

ICC has posted a picture of ‘Dazzle the dog’ on its Twitter handle, in which he is seen pressing the ball in his mouth. Simultaneously, the ICC wrote – This time we have another winner for the Player of the Month award.

The dog became a fielder by entering the field
Actually, this dog had entered the field in a women’s cricket match being played in Ireland. The match was the semi-final of the Ireland Women’s T20 Cup and was being played between Brady Cricket Club and Civil Service North of Ireland Cricket Club. In 8.4 overs of the match, AB Lackey played a shot in the direction of the thirdman and the fielder threw the ball towards the wicketkeeper. The wicketkeeper also threw the ball towards the stumps, but instead of hitting the stumps, the ball went to another side.

During this, a dog came running fast on the field and he caught the ball with his mouth and started running on the field itself. A leash was tied around the dog’s neck and a boy came running after him on the field. The female batsman standing at the non-striker’s end called the dog to her and took the ball out of her mouth. During this the game was halted for some time.