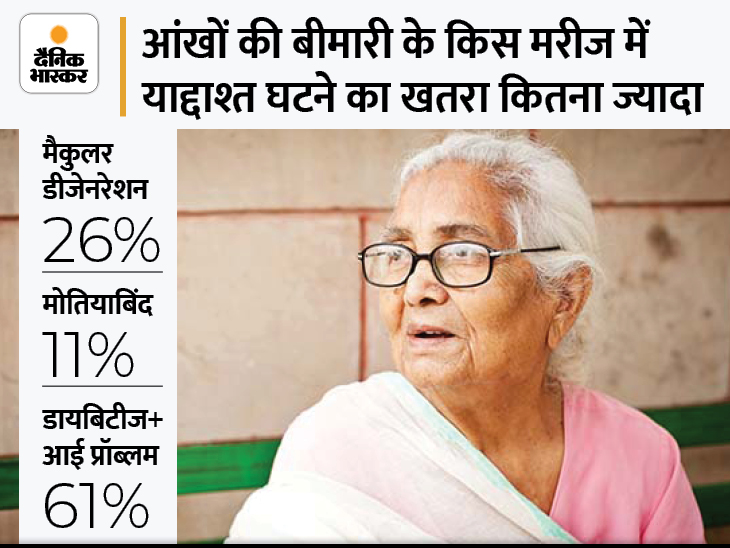 If there is a problem in the eyes, the risk of dementia ie memory loss increases. In patients whose eyesight is deteriorating, their memory and thinking ability may decrease. Researchers from China’s Guangdong Academy of Medical Science, who conducted this research, say that the connection of eye diseases in increasing age is related to the decreasing memory of the elderly, but why this is so has not been clearly revealed.

Such research was done on 12,364 elderly people
A study was done to understand this connection between the eye and the brain. The research involved 12,364 people aged 55 to 73. The research report revealed that aging eye disease increases the risk of memory loss. For example, the risk of dementia was up to 26 percent higher in patients with macular degeneration. At the same time, 11 percent of cataract patients and 61 percent of those suffering from diabetes and eye problems were more likely to have dementia.

Scientists argue on eyesight and dementia
Researchers say, what is the exact reason behind the loss of memory when there is a problem in the eyes, it is not clearly known. There could be a reason behind this. With increasing age, the eyesight of the elderly starts decreasing. Due to this, the activity in their brain also decreases. That’s why they are not able to recognize the faces of friends and family properly.

This research, published in the British Journal of Ophthalmology, says that every year in the UK, about 50 percent of people aged 65 years suffer from cataracts and 40 thousand people are troubled by macular degeneration.

The risk is even higher in diabetes and heart patients
Researchers say that patients who have some kind of problem with their eyes and are suffering from diabetes, heart disease, stroke or depression are at an even higher risk of dementia.

According to research, eye diseases associated with macular degeneration, cataracts and diabetes are also at higher risk. Efforts are being made to understand this connection between eyes and memory.

According to the World Health Organization, 10 million new cases of dementia are reported every year. According to new research by American scientists, by 2050, by educating people, the increase of its 60.2 million cases can also be stopped. The results of this research will help policymakers to devise new strategies to prevent cases from escalating.

The number of dementia patients in 2019 was more than 50 million. After the next three decades, this figure will reach 150 million.