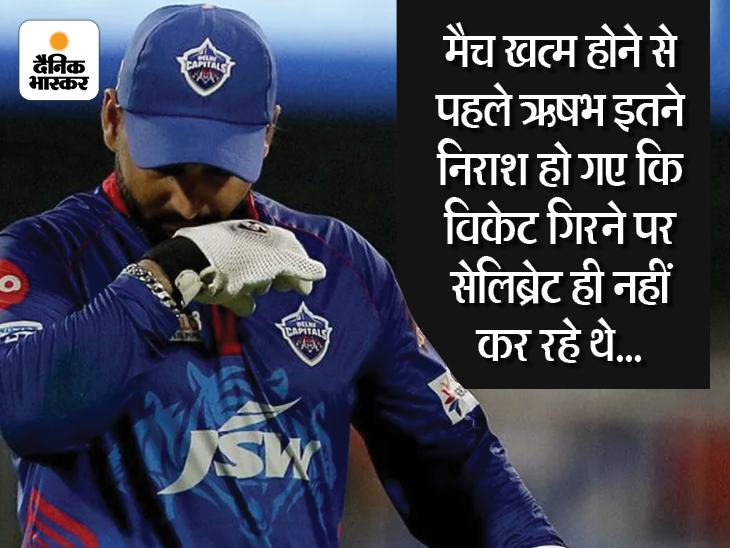 IPL Qualifier 2, a team Delhi Capitals came top of the points table, winning 10 out of 14 matches; On the other hand, Kolkata Knight Riders, who somehow made a place in the top 4, won 7 out of 14 matches.

If the child is also asked by telling these figures, he will tell that Delhi is stronger, but cricket is played in the present tense. Where does the past tense come in handy? Same thing happened. Delhi remained in its glory and kept on dripping catch on catch, as if the match belongs to them, no matter how many games they will win.

It felt like this in the last few times, but the end result was that Delhi Capitals had to lose this match due to mistakes. Let’s look at the 10 most important pictures of the match.

Rishabh Pant looked desperate as the match started. He continued to practice batting in the dugout. When the first time out, both the Delhi Capitals batsmen Shikhar Dhawan and Marcus Stoinis present at the crease were playing well, but Pant came on the field wearing pads in both feet. Ricky Ponting came back and forth. Pant started talking to the batsman.

Actually, Shreyas Iyer and Shikhar Dhawan were playing and there was no boundary from 4 overs i.e. 24 balls. Pant might have made his point. Shortly after the time out, Dhawan got out trying to hit a six.

In the same attempt, a desperate Pant was also dismissed after scoring 6 runs in 6 balls. He returned after taking a simple catch. That’s why the disappointment on Pant’s face was clearly visible.

On the other hand, former Delhi captain Shreyas Iyer kept fighting. He played the captaincy innings as before in the required match. He took 15 runs in the last over to take the score to 135 runs. Otherwise, Pant’s team would have been reduced to even less.

When Pant came to stop the front team on this small score, his body language was looking disappointed and disappointed. Neither he was seen encouraging his bowlers, nor was he seen speaking like that from behind the wicket. Nor was he seen managing the team with enthusiasm.

Its effect was seen throughout the match. Catches are dropped very easily. Rabada, who took a brilliant catch off his delivery, missed the opportunity of a simple c-n-bowl. When the match was getting stuck, R Ashwin dropped a very easy catch. South African player Kagiso Rabada is in the picture. Even his own national team has not won any major league so far. Stay here empty handed.

When Rishabh Pant caught Shubman Gill’s catch in the 17th over, he was so disappointed that he did not even consider it right to celebrate it. Just threw the ball back to the bowler, go bowling.

Luck was kind to Rishabh here too that Kolkata lost 6 wickets in just 8 runs to make. Then somehow Pant woke up, but at that crucial time also Shreyas Iyer dropped a catch. After that Pant kept pushing. Shakib kept on appealing with all his might to take the wicket of Al Hasan, but by then the caravan had been looted.

There was as much desperate Pant as there was Dinesh Karthik in Kolkata’s team. Whenever there was time out, he would give instructions to the team like a captain. While Captain Morgan listened silently. When the turn came to rescue Kolkata in the difficult hour of the match, Karthik returned to the pavilion without opening the account in 3 balls.

That was the story of this match. Kolkata left no stone unturned to ensure their defeat in the last four overs. Within just 8 runs, 6 top order batsmen had gone back and sat down, but Delhi made so many mistakes that they got the victory in the gift. The Marcus whom Delhi fed for such a difficult situation was not in the field in the last over. Ashwin came to the last over and he was hit by a brilliant six off the 5th ball of the 20th over by Rahul Tripathi to win the match.