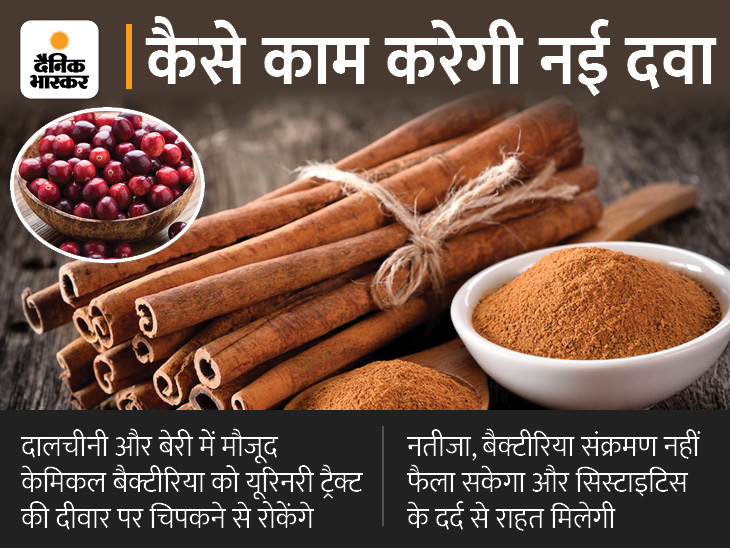 Pain and infection can be removed with medicine made from cinnamon and berry. Scientists are testing the drug. This trial is being done for a disease called cystitis. Women are the most affected by this disease.

Scientists believe, with the new drug, E-coli and other bacteria responsible for the infection will be prevented from spreading the infection.

How is this medicine, how does it work and what is cystitis that most women suffer from, know the answers to these questions…

What is medicine and how it works, first understand it
The medicine is prepared by mixing cinnamon, berry and healthy bacteria. In simple language, a structure named P-fimbri is found on the body of bacteria. With the help of this, the bacteria strengthen their hold on the wall of the urinary tract of the person. As a result, it gradually increases the infection.

The new drug targets this p-fimbri structure and prevents the bacteria from spreading the infection. The trans-cimaldehyde present in cinnamon and the chemical elements present in the berry make it difficult for bacteria to survive in the urinary tract. In this way the infection is stopped from progressing.

At the same time, the beneficial bacteria present in the drug works to protect the immune cells of the bladder wall.

What is cystitis, the new drug that will treat it
Inflammation and irritation in the bladder is called cystitis. In most cases, it is caused by a bacterial infection. When this infection reaches the kidney from the bladder, the condition becomes more serious. It is usually treated with antibiotics.

Common symptoms include frequent urination, strong odor, pain or burning during urination. Symptoms such as pain and fever may also appear on one side of the back. In this case, medical advice is asked to be taken.

Why do up to 60 percent of women struggle with it?
According to research reports, 50 to 60 percent of women suffer from infection like cystitis at some point in their life. There is also a reason why most of its cases are reported in women. In fact, the urethra is shorter in women than in men. Therefore, it becomes easier for bacteria to reach the bladder. Patients look tired when infected.

Apart from bacteria, medicines given in diarrhea and nausea can also be the cause. Antibiotics are given to the patient during the treatment, but these drugs, which are slowly neutralizing the bacteria, are making treatment difficult.

Trial of new drug going on in Paris
This drug has proved effective in early clinical trials. After this, the human trial of the new drug is going on 80 women aged 18 to 65 years at the Alfred Fournier Institute in Paris. These are women who have suffered from cystitis at least twice in the last 6 months.

The women involved in the trial are being given one tablet twice a day. Groups of women taking and not taking the drug will be compared in the trial for about 6 months. After that the results will be released.