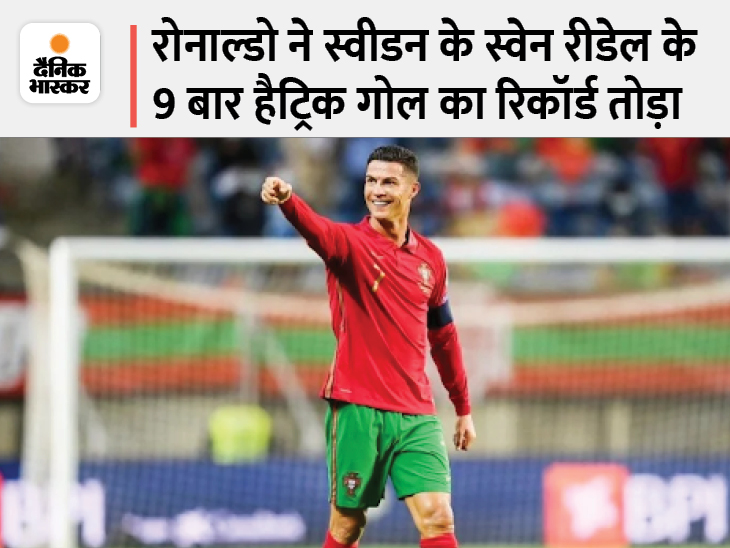 Cristiano Ronaldo of Portugal has registered another record in his name. He has become the footballer to score the most number of hat-trick goals in an international match. In the match against Luxembourg in the FIFA World Cup qualifiers, he did this by scoring two goals with a penalty and a goal header. With this Portugal defeated Luxembourg 5-0. With this win, Portugal team has moved to second place in Group 2. In the first place is the team of Serbia with 17 points. At the same time, Portugal has 16 points.

Most goals for Ronaldo
Apart from this, Ronaldo now has 115 international goals to his name with three goals against Luxembourg. He is also the highest goalscorer in international football. During Euro Cup 2020, he equaled former Iranian footballer Ali Dei’s record for most goals (109). After this, Dae’s record was broken by scoring two goals in a match against the Republic of Ireland in September.

Ronaldo scored the first two goals on penalties
Ronaldo scored two of his three goals against Luxembourg in the first half. The first goal he scored in the 8th minute of the match converted a penalty to give Portugal a 1-0 lead. He then scored the second goal on a penalty in the 13th minute. At the same time, in the 17th minute of the match, Bruno Fernandez scored a goal to put Portugal 3-0 ahead at half time.

Third goal scored by header
Ronaldo scored the third goal through a header in the 87th minute of the match to give Portugal a 5-0 win. Earlier in the match, Joao Palinha scored for the team in the 69th minute.