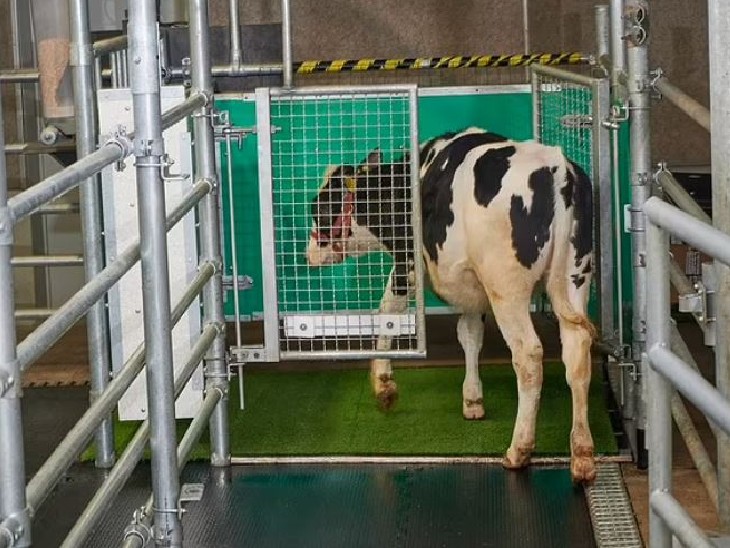 Cow can also use toilet like a human. German scientists have trained cows in such a way that they release urine only by going to the toilet ‘Mulu’ specially made for them. Scientists say, the emission of greenhouse gases will be reduced by cows doing this.

The release of urine by cows going to the toilet in this way will prove beneficial for the environment. This study has been done by Germany’s Research Institute for Farm Animal Biology.

How to stop greenhouse gas
According to research published in Current Biology, preventing animal excreta in the open can prevent the growth of ammonia. Which adversely affects the fertility of the soil. Ammonia can be converted into nitrous oxide with the help of microorganisms. It is the third most important greenhouse gas after carbon dioxide and methane.

Greenhouse gases include carbon dioxide, methane, nitrous oxide, hydrofluorocarbons, perfluorocarbons (PFCs) and sulfur hexafluoride. These gases are mainly responsible for the increase in temperature around the world.

Researchers say agriculture is a major source of ammonia emissions. That’s why we have designed a special type of toilet. Where ammonia can be collected from cow waste and prevented from spreading directly into the environment.

Every activity of the cows was monitored.

Cattle are also clever, they also have the ability to learn
Researcher Jane Langbein says, people generally believe that cattle cannot be controlled in terms of bowel movements and urination, but it is not so. Cattle are as smart as any other animal and can learn a lot. That’s why we can’t teach them to use the toilet.

According to German scientists, cattle are usually left to graze in the plains. These cattle urinate and excrete there. This sewage works to contaminate the soil there and the nearby water source. Therefore, collecting their feces in a toilet can prevent the spread of pneumonia.

After training, 11 out of 16 cows learned to defecate in their toilets.

Training given to such cows
Scientists started training the calves. For this calves were fed sweet things all the time so that they feel more urine. After this they were taught to urinate in a special type of toilet. The calves were sent to a closed toilet, where they tried to urinate.

According to the researchers, after a few weeks of training, 11 out of 16 calves learned to go to the ‘moolu’ toilet. It is easier to give this training to small calves than to large calves.