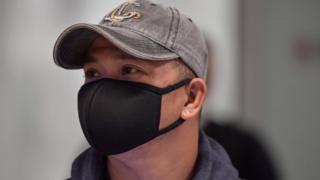 The world is in “uncharted territory” on the coronavirus outbreak, the World Health Organization (WHO) has said.

Deaths globally have now passed 3,000. Most are in China but in the past day there were nine times more new infections outside China than inside.

However, Dr Tedros insisted: “We can still push this virus back”.

He said the development of the Covid-19 disease globally was not a “one-way street” and could be combated if countries acted quickly and effectively – starting with containment measures.

“There is no choice but to act now,” he said.

One of the countries worst affected outside China – Italy – on Monday saw a jump in its death toll from 34 to 52.

What do I need to know about the coronavirus?

What else did the WHO say?

Dr Tedros’s main advice was that each country had to look at their own situation as there was no one-way-fits-all means of tackling the outbreak.

“Each country must have its own approach but it must start with containment,” he said.

This was a “unique virus with unique features” and the WHO would have expected wide contagion by now, but containment measures had appeared to work, the doctor said.

Of the 62 countries reporting cases of infection, 38 of them had 10 or fewer, he added.

“Around eight countries have not reported new cases for two weeks and have been able to contain the outbreak,” he said. China had also shown containment was possible even in countries with a large number of cases.

The WHO would continue to monitor whether the outbreak should be called a global pandemic, Dr Tedros said.

South Korea, Italy, Iran and Japan remain the greatest concern. A WHO staff member has tested positive in Iran, although the symptoms are mild, Dr Tedros said.

What is the situation globally?

There are now almost 90,000 cases worldwide in about 70 countries, although the vast majority – just under 90% – remain in China, and most of those are in Hubei province, where the virus originated late last year.

Of the nearly 8,800 cases outside China, 81% are in four countries – Iran, South Korea, Italy and Japan.

Italy raised its death toll by 18 on Monday, with 1,835 confirmed cases, most of them in the Lombardy and Veneto areas of the north.

Iran reported another 12 deaths, taking the total there to 66. They included Mohammad Mirmohammadi, a high-ranking adviser to the country’s Supreme Leader Ali Khamenei, Iranian media reported.

Two people have died in the US, both in the state of Washington.

President Donald Trump said he had told pharmaceutical companies to accelerate work on a vaccine, while New York’s governor, Andrew Cuomo, warned it was “inevitable” more people would test positive in the city.

In the UK, where there are 39 confirmed cases, Prime Minister Boris Johnson said the virus was “likely to become more significant in the days and weeks ahead”, after holding a meeting of the emergency Cobra committee.

The nation on Monday reported two more deaths, taking the total to 28.

About 60% of the country’s more than 4,000 confirmed cases are members of the Shincheonji Church of Jesus religious sect. Members are believed to have infected one another and then travelled around the country, apparently undetected

The sect’s leader, Lee Man-hee, got on his knees and bowed at a news conference to apologise.

“Although it was not intentional, many people have been infected,” said the 88-year-old leader. “We put our utmost efforts, but were unable to prevent it all.”

Prosecutors in South Korea have been asked to investigate Mr Lee on possible charges of gross negligence.

What’s the situation in China?

China reported 42 more deaths, all in Hubei. The province has registered more than 90% of the global fatalities.

Only eight of the newly reported cases of infection were outside Hubei, suggesting containment was working.

The 206 new cases reported nationwide on Sunday represented the lowest number of daily cases since 22 January.

A spokesman from China’s National Health Commission said the next stop would be to “focus on the risks brought by the resumption of work”.

The WHO says the virus appears to particularly affect those over 60, and people already ill.

In the first large analysis of more than 44,000 cases from China, the death rate was 10 times higher in the very elderly compared to the middle-aged.

But most patients have only mild symptoms and the death rate appears to be between 2% and 5%, the WHO said.

By comparison, seasonal flu has an average mortality rate of about 0.1%, but is highly infectious – with up to 400,000 people dying from it each year.

How have you been affected by the spread of Covid-19? Share your experiences by emailing [email protected].