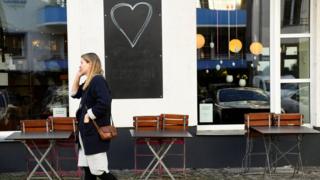 Germany and France have imposed stringent new measures to limit social contact as countries across Europe try to stem the spread of the coronavirus.

Mr Macron also said the European Union’s external borders would be closed to travellers from Tuesday.

In Germany, most non-grocery shops and venues have been ordered to shut.

Chancellor Angela Merkel also banned religious services and told people to cancel any domestic or foreign holiday travel. Schools across the country have already been shut.

In the UK, Prime Minister Boris Johnson did not announce compulsory restrictions but urged people to avoid pubs and clubs and refrain from non-essential travel or having contact with others.

Earlier, the head of the World Health Organization (WHO), Dr Tedros Adhanom Ghebreyesus, said governments were not doing enough to combat the pandemic, and urged them to step up their testing programmes.

“You can’t fight a fire blindfolded and we can’t stop this pandemic if we don’t know who is infected,” he said at a news conference in Geneva. “We have a simple message for all countries: test, test, test.”

There have been more than 174,000 confirmed cases of coronavirus globally and over 6,700 deaths, according to a tally from Johns Hopkins University.

What is France doing?

In a televised evening address, President Macron ordered people to stay at home and only go out for essential duties. He said the previous measures, including the closing of schools, cafes and non-essential shops, had proved insufficient.

“Even while medics were warning about the gravity of the situation, we saw people get together in the parks, busy markets and restaurants and bars that did not respect the order to close,” he said in the 20-minute address.

The restrictions will be in place for at least 15 days, Mr Macron added, vowing to punish any infringement. He also said the army would be used to help transport the sick to hospital and that the second round of local elections due this weekend was being postponed.

On Monday, the head of the country’s health service, Jerome Salomon, said the outbreak was “very worrying” and “deteriorating very fast”. France has so far registered more than 6,000 infections and 148 deaths.

The country will close its land borders from midday (11:00 GMT) on Tuesday, when the EU’s external borders and the Shenghen borderless zone will also be shut, Mr Macron said.

Under a proposal announced by the European Commission earlier, non-essential foreign travel would be banned for 30 days. Long-term residents, family members of EU nationals and diplomats would be exempt as well as cross-border and healthcare workers and people transporting goods.

What is Germany doing?

Chancellor Merkel announced that venues including clubs, bars, leisure facilities, zoos and playgrounds would be closed. Restaurants will have to enforce a minimum distance between tables and work under restricted hours.

“The better everyone sticks to these rules, the faster we’ll get through this phase,” she said at a news conference in Berlin, vowing that the government would try to minimise the economic impact of the outbreak.

Germany now has close to 7,000 confirmed cases of coronavirus, and 14 deaths. Large gatherings nationwide had already been banned.

Traffic crossing Germany’s borders with France, Austria, Switzerland and Luxembourg is now restricted to goods and people commuting for work. Only the borders with the Netherlands and Belgium are as yet unaffected.

How are other Europe countries responding?

Spain will start controls at land borders at midnight on Monday and only Spanish citizens, residents and special cases will be allowed in the country.

The Spanish government imposed a partial lockdown on its 47 million inhabitants on Saturday, as part of a 15-day state of emergency. People are barred from leaving home except buy essential supplies and medicines, or for work.

Italy, the worst-affected nation outside China, where the virus originated, has more than 20,000 cases and has suffered more than 1,800 deaths.

Prime Minister Guiseppe Conte told the Corriere della Sera newspaper that damage from the virus would be “serious and widespread”, adding: “After the coronavirus, nothing will be as before, we will have to sit down and rewrite the rules of trade and the free market”.

Last week the WHO said Europe was now the “epicentre” of the virus and urged governments to act aggressively to control the spread of Covid-19, the disease caused by the coronavirus.

Dr Tedros also told other countries to follow the containment strategies used in China and South Korea, saying they showed the pandemic was controllable.

In other European nations:

What is happening in countries outside Europe?

In the US, President Donald Trump said Americans should not gather in groups of more than 10 people and avoid restaurants over the next 15 days, saying the country was facing “an invisible enemy” that is “so contagious”.

Iran, which has the third-highest number of confirmed cases globally, on Monday reported 129 more deaths, its highest tally in a single day. Health ministry spokesman Kianoush Jahanpour urged people not to travel outside their province.

The fourth-most-affected nation, South Korea, again reported a slowdown in new infections, with President Moon Jae-in saying he was increasingly confident of overcoming the virus.

There has been a sharp rise in coronavirus cases in Africa. Strict measures are being introduced in many of the 26 countries affected, with schools and borders closing in several parts of Africa.

The number of confirmed coronavirus cases and deaths outside China has now surpassed the number inside. More than 87,000 people have been infected outside China, while just over 80,000 cases have been reported inside.

Have you been affected by the coronavirus? Share your experiences by emailing [email protected].