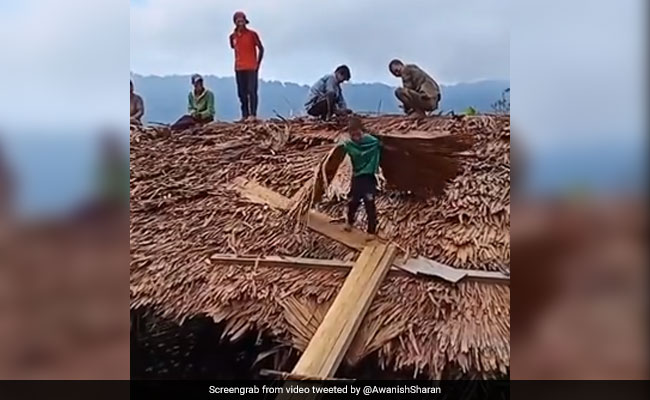 The child did a wonderful jugaad to fly, making fun wings and flying like this

Children are true to mind and their innocence wins everyone’s heart. Even if they do evil, we still fall in love with them. A funny video filled with the innocence of a small child is going viral on social media, in which the child has done something with his evil mind, due to which people have become convinced of his innocence. Actually, in this video going viral, some people are engaged in filtering the roof of their house. In the meantime, a small child makes wings for himself from the same thatch and tries to fly by putting them on. This video of the child has won the hearts of the people.

This video going viral has been shared by IAS officer Avneesh Sharan on Twitter. Along with the video, he wrote in the caption, It is hope that gives you the spirit to fly. Somewhere in Arunachal Pradesh. In this video you can see that some people are seen covering with dry leaves. Meanwhile, a small child playing there catches palm leaves in such a way that they look like feathers on seeing them. Then he jumps down from the thatch, flapping the same leaves like a feather. Seeing this everyone starts laughing.

It’s the ‘HOPE’ that makes you fly.

Seeing such a jugaad for the child to fly, everyone has become a fan of the child. The child’s innocence has won everyone’s heart. People are commenting a lot on the video. This video has been viewed more than 50 thousand times so far. One user wrote in the comment, the birds will surely get their destination…..these spread their wings speak….