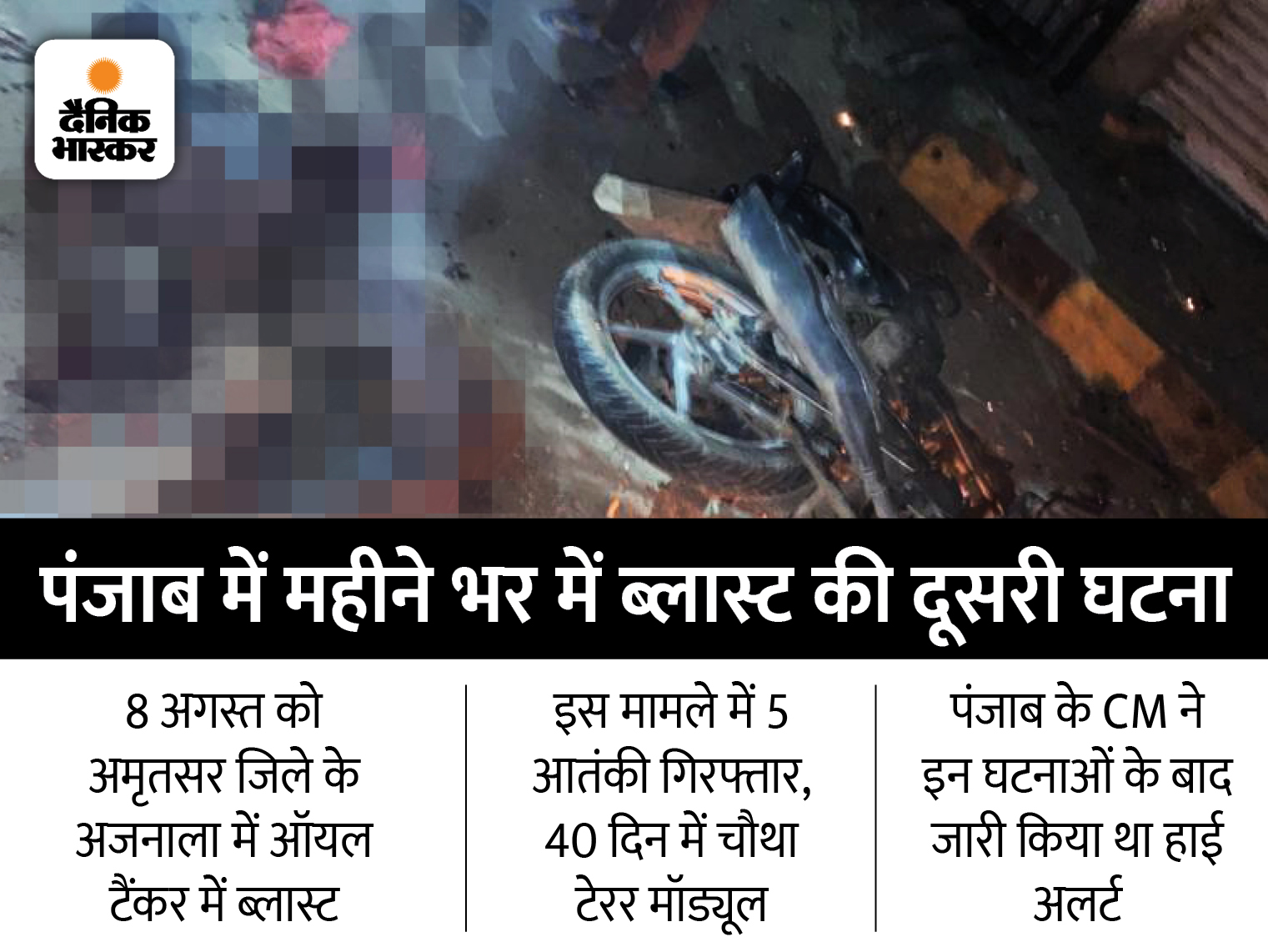 A blast took place in Jalalabad town of Fazilka district on Wednesday evening, hours after Punjab Chief Minister Captain Amarinder Singh sounded a high alert. One person died on the spot in the blast, while another was seriously injured.

In Jalalabad, the blast took place in a bike near Punjab National Bank, leaving the bike rider to pieces. A passer-by who was passing by at the time of the accident was seriously injured. He has been referred to Faridkot Medical College in critical condition.

According to preliminary information, this explosion took place either in the tank of the bike or in any item kept above the tank. The blast was so fast that the body of the bike rider jumped up several feet in the air. His hands were blown off and his torso was badly damaged. Seeing the condition of the bike and the person riding on it, this blast is not being considered normal.

As soon as the information was received, the police team reached the spot. The injured’s sister Jyoti, who came out after the incident, told that her cousin Luv Kumar has also been injured in this incident. Lavkumar is 22 years old.

The young man came on a bike without a number
According to local shopkeepers, a person on a bike without a number was coming from the old vegetable market in the direction of Bank Road. He was holding an envelope in his hand. As soon as the bike reached in front of Punjab National Bank, it exploded. The bike rider fell on the ground after jumping about 15 feet in the air. All the fingers of both his hands were lost.

SHO of Jalalabad police station Bazir Chand rushed the seriously injured passerby to the government hospital. After first aid from here, he was referred to Faridkot Medical College.

second incident in the month
This is the second incident of blast in Punjab in a month. Earlier on August 8, there was an explosion in an oil tanker at Ajnala in Amritsar district, which DGP Dinkar Gupta called a terrorist incident on Wednesday itself. According to sources, mischievous elements sitting across the border in Punjab have delivered a huge amount of ammunition.

ISI backed terrorist module unearthed in Punjab
The Punjab Police on Wednesday busted the fourth Terror Module within 40 days, which was operating with the support of Pakistan’s intelligence agency ISI. The case pertains to the seizure of tiffin bombs and RDX from Amritsar and Jalandhar last month. He was behind the blast in an oil tanker in Amritsar on 8 August. It was blasted with IED tiffin bomb.

4 terrorists arrested for blasting oil tanker with tiffin bomb, 5 arrested in the case so far