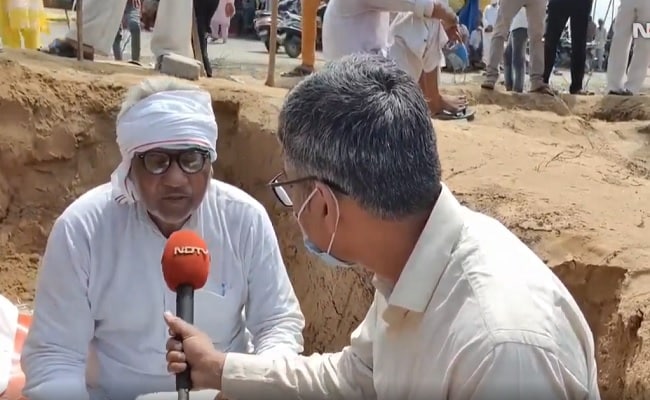 In Mandola Vihar, Ghaziabad, against the Agricultural Law Bill and land acquisition, the front of another protest demonstration of the farmers has opened. Here, hundreds of farmers from six villages are sitting on dharna by digging graves. In Mandola Vihar, Ghaziabad, two dozen farmers are going on a unique fast unto death. In front of the multi-storey residential colony of Mandola Vihar, farmers of six nearby villages have been protesting against the land acquisition of ‘Awas Vikas Parishad’ for several months.

In 2000, the Awas Vikas Parishad had acquired more than 2,600 acres of land from the farmers of Mandola and six surrounding villages. But now the reins of this movement are again discussed in the hands of Manveer Teotia, who has agitated against land acquisition in Tappal, Aligarh. Let us tell you that Manveer Teotia has thirty-six figures from Rakesh Tikait, so he says that he is fasting till death against amendment in agriculture law and irregularities in giving land compensation to the farmers of Mandola.

Tevatia said that, ‘The movement which is going on in Delhi is giving pain to the people. People are facing problems due to the closure of the border. Will take off the buckle. Will give sticks. This is abusive language. This is not a movement. Neeraj Tyagi, a farmer, is also among those who staged a dharna by building a grave. 60 bighas of land of Neeraj of Mandola village has also gone under acquisition. They allege that they were forcibly compensated at the rate of Rs 1100 metre, now the ‘Awas Vikas Parishad’ is selling that land at the rate of Rs 40,000 metres.

He says, ‘All our land has been forcibly acquired. There was a ban on construction in 2006, but we have been agitating for five years, but no one is ready to listen. In fact, the farmers sitting on dharna in Mandola Vihar are demanding that the compensation for the land should be Rs 4400 metre. Meanwhile, the administration is constantly trying to end the strike of these farmers. Two rounds of talks have also been held with the administration but no solution has been found at the moment.