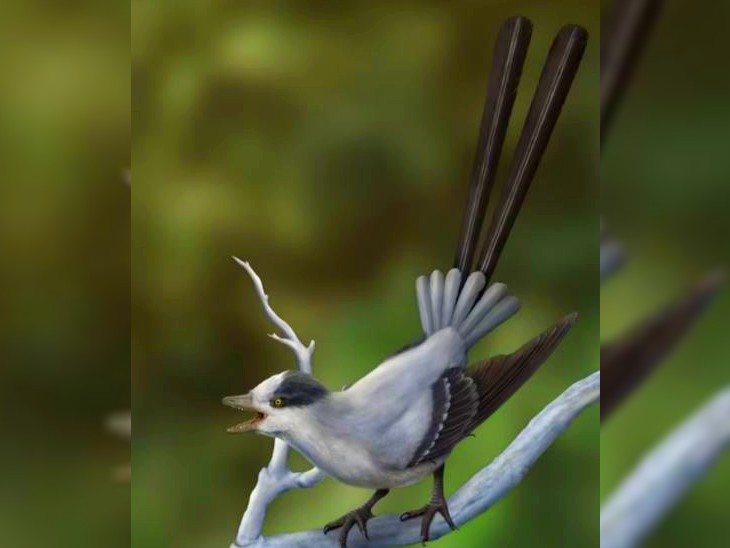 Scientists say, the remains of this 120 million year old bird have been found. Looking at the remains, it is known that the wings and tail of this bird have been an important part of its beauty. It used its long tail to attract male birds for mating.

Fossils found in ‘Jurassic Park’ of China
Fossils of this bird have been found in the Jehol Biota of the north-western part of China. This part is called Jurassic Park of China. Surprisingly, 120 million years old bird’s feathers can be clearly seen in the fossil.

Tail 150 times longer than body
Yuanchuavis compsosaura was a small bird, but its tail was 150 times longer than its body. Researchers say, the bird’s tail helped it find mates, but caused difficulties in flying. It avoided flying in the open sky, as it could not fly as fast as other birds when predators arrived.

Fossils of this bird have been found in the Jehol Biota of the north-western part of China. The sketch of the bird has been prepared on the basis of the fossil.

Named after a bird in Chinese mythology
Yuanchuavis compsosaura belongs to the group of extinct birds that looked like modern birds even at that time. This bird also has teeth which made it different from distance birds. This bird has two types of tail, one long and one short. In Chinese mythology, a bird named Yuanchu is mentioned. The new bird was named Yuanchuawis after him.

Researcher and paleontologist at the Chicago Field Museum, Jingmai O’Connor, said, “We have never seen a bird with such a wide variety of wings before.” The last part of the bird’s body has small feathers and from this part there are two long tail feathers. These wings are attached to its central spine.

That’s why this bird became extinct
Scientists believe that this bird especially liked to live in the forests. Due to the spread of fire here, the forests of the world were destroyed. As a result, they gradually became extinct due to snatching of their habitat.