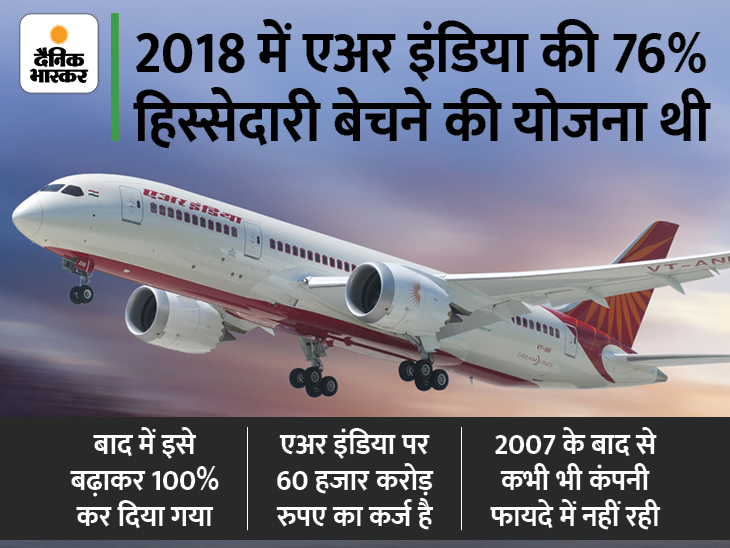 Air India can return home after 68 years. It is reported that Ajay Singh, chairman of Tata Group and SpiceJet, has bid to buy Air India. Today was the last date for bidding. Air India was earlier with the Tata Group. The Department of Investment and Public Asset Management has given this information on social media.

The bidding time was till 6 pm. Whichever company will be finalized in this bid, it will be handed over to Air India by December.

Tata started Air India in 1932
Air India was started by Tata Group in 1932. JRD of the Tata Group Tata was its founder. He himself was a pilot. Then it was named Tata Air Service. By 1938, the company had started its domestic flights. After World War II, it was made a government company. After independence, the government bought 49% stake in it.

Mumbai office also included in the deal
Under this deal, Air India’s head office in Mumbai and Airlines House in Delhi are also included. The market value of the Mumbai office is more than Rs 1,500 crore. At present, Air India controls 4,400 landing and parking slots in the country and 1800 abroad.

Swamy alleges rigging in the auction process
Meanwhile, BJP Rajya Sabha MP Subramanian Swamy had earlier this week said on social media that the process of Air India auction was being rigged. He had talked about going to court against this. Swamy had sought cancellation of the auction process. He said that SpiceJet itself is a company surrounded by financial problems and as such it is not entitled to bid. He also called Tata ineligible. Said that Tata is in trouble in the matter of Air Asia and the matter is pending in the court.

The company is in continuous loss since 2007.
Air India has never been in net profit since its merger with Indian Airlines in 2007. The company expects a loss of Rs 9,500-10,000 crore for the quarter ended March 2021. Air India has a total debt of Rs 60,074 crore as on March 31, 2019. Whoever buys Air India will have to bear the debt burden of Rs 23,286.5 crore. The rest of the loan will be transferred to Air India Asset Holding through a special purpose vehicle. This condition was imposed in the EoI issued in January 2020.

Loan to be repaid from non core assets
The proceeds from the sale of Air India’s non-core assets will be used to pay off Air India’s debt. The reserve price of Air India’s property has been fixed by its oversight committee. It has received proposals from three valuers.

16 Property Price Reduction
The Oversight Committee had approved a 10% reduction in reserve prices of 16 properties. Because many times these properties were auctioned, but due to the high price, no buyer came forward for it. In October 2020, the government had said that Air India would be sold at its enterprise value and not equity value. Enterprise value refers to the value of equity, debt and cash with the company. Equity value only takes into account the value of the company’s shares.