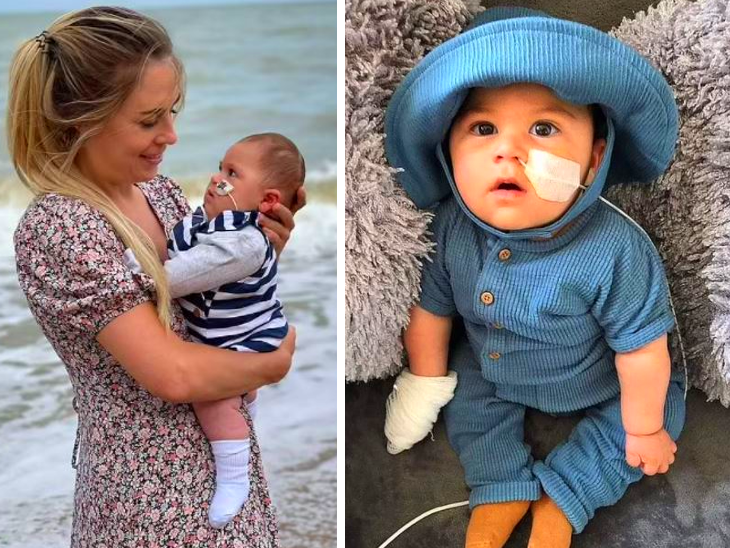 Leo, a 6-month-old baby in Canada, is battling a disease that even doctors have no name for. Leo can neither cry nor breathe properly. The doctors are also shocked by his illness. Leo’s 32-year-old mother Lucinda Andrew is pleading with doctors to conduct research on the child’s treatment and disease.

body movement after birth
Lucinda gave birth to Leo on March 5 via normal delivery at Medway Maritime Hospital in Canada. After birth, doctors noticed that the child was not able to move.

The child was examined. The report revealed that Leo is suffering from a genetic condition that affects the protein coding of the TBCD gene. Such cases are rare. Till now doctors have not been able to give any name to this disease.

Lucinda says she wants doctors to research this mysterious disease so that her son can be treated. Leo can’t even cry. He has epileptic seizures and has trouble breathing. She was placed in the Neonatal Intensive Care Unit a few days after birth.

Leo is being given physiotherapy at home and hydrotherapy in water.

The disease also had a bad effect on the brain
On March 11, doctors transferred the child to St Thomas’ Hospital for treatment. Doctors say that Leo is suffering from a genetic condition. The disease is directly related to the TBCD gene. Lucinda says, the doctors told me about the disease but scientifically there is no name for this disease. The doctors themselves are also surprised.

According to Lucinda, due to this disease, Leo’s brain has also been affected badly. He has started having epileptic seizures. At present, he is being treated at home with the help of physiotherapy. His hydrotherapy exercise is being done in the pool of water.

Leo’s mother, Lucinda, believes that research needs to be done on the child’s illness, so that there is a ray of hope for his treatment.

Researched and mailed to many doctors
Lucinda says, even experts know very little about this disease because it is a very rare disease. To understand this disease, I did a lot of research with the help of internet and e-mailed many renowned experts from all over the world.

Lucinda believes that research needs to be done on the child’s disease, so that there can be a ray of hope for its treatment.